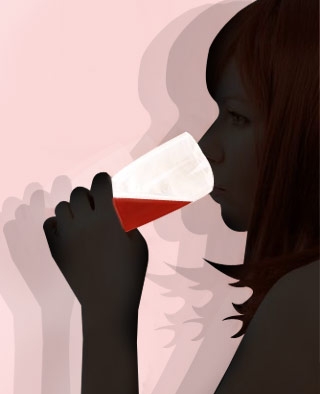 The upsides and downsides of alcohol are widely known. We all know how excess alcohol can spell doom for our health. However we still over-indulge especially during weekends. Yes it could be our lifestyle that makes us binge drink. But a new research now shows that binge drinking means serious injury to the bones.

Carried out by Researchers at Loyola University Stritch School of Medicine, the study indicates that binge drinking is in fact hazardous to the bones because it affects the genes that maintain our bones. While alcohol in moderate proportions is not bad, drinking too much could seriously be battering our bones.

According to the dietary guidelines for Americans issued jointly by the U.S. Department of Agriculture and the U.S. Department of Health and Human Services, moderate drinkers are defined as men who take no more than two standard drinks and women who enjoy less than or just about one standard drink per day. Individuals who go overboard that’s nearly 5 drinks for men and 4 drinks for women in 2 hours are called as binge drinkers.

Lead researcher and bone biologist, John Callaci, PhD, mentioned, “Of course, the best way to prevent alcohol-induced bone loss is to not drink or to drink moderately. But when prevention doesn’t work, we need other strategies to limit the damage. We found that the expressions of certain genes important for maintaining bone integrity are disturbed by alcohol exposure”

To determine the effects of binge drinking, rodents in the laboratory were analysed by John Callaci along with colleagues’ professor Frederick Wezeman and Ryan Himes, a research assistant in the Burn and Shock Trauma Institute of the university. As part of the study, three days in a row the researchers injected the rats with the amount of alcohol defined as equivalent to binge drinking or subjected them to chronic alcohol abuse for four weeks. The control group was administered saline injections.

Concentrating on genes that are known to contribute to bone health, researchers discovered that for those rats that were under situations similar to binge drinking, the bone mineral density and bone strength had eminently lowered. The researchers specify that in the affected genes alcohol disturbs the amounts of protein making templates RNA. Increasing the level of RNA in some and decreasing RNA in other genes, when alcohol changed the amount of RNA it also disrupted two molecular pathways.

Dubbed as the Wnt signaling pathway and the Intergrin signaling pathway, the two pathways are in charge of normal bone metabolism and maintenance of bone mass. With this significant association found between binge drinking and harm to bones, researchers are positive that the study should initiate in the development of new drugs for binge drinkers so that they are at least risk of bone loss. In addition to this, they also look forward to treatment for people with osteoporosis.

The study is published in the journal Alcoholism: Clinical and Experimental Research.