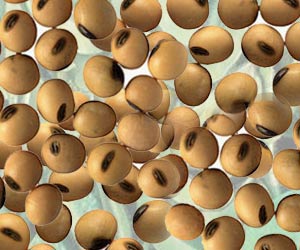 Genetically Modified crops (GM) have been a rage ever since they were first introduced. It now appears that they are not only adding to the worlds food supply but also have the potential to safeguard us against certain diseases. Researchers at the University of South Dakota have followed suit and come up with a genetically modified soya bean that could help prevent heart attacks.

“Oil from GM soya increased omega-3 in the participants’ blood from an average of 4 per cent to 5 per cent. This could lead to a 50 per cent drop in the risk of heart attacks. We saw these effects in our subjects after just a few weeks,” revealed lead author, William Harris, professor of medicine. “I can imagine that, if you got this into the food supply and people were eating it year after year, you do have an opportunity to raise omega3 levels in the blood.”

“Consumers will have a choice: some may choose not to try it, but others will. It’s another reason for consumers to pause and consider whether GM has a role to play. I think it does, not only for how we deliver food for the planet, but also for how we protect our own health. We’ve shown for years that GM crops can control pests. That’s important to consumers, but not in a personal way. Hopefully this will be personal enough to make a difference,” commented David Stark, Monsanto’s vice president for consumer traits.

Including about 33 volunteers, the crop has already been successful in phase one of testing. Researchers found that the crop was capable of increasing omega-3 acid levels in the blood. The acid is known to be beneficial by protecting us against cardiovascular diseases and diabetes as also aiding the growth of brain cells in the young. Considering its ability if the crop does get an approval it will be the first GM food to be used for direct health benefits.

Omega 3 acids is mainly found in fish like in salmon, trout and fresh tuna and the Food Standards Agency in Britain suggests people eat a portion of oily fish a week. However the experts reveal that excess fish consumption is likely to destroy for marine stocks and hence the soya bean research finds an important place. Presently Britain does not have any GM crops under commercial cultivation.

While the biotechnology company Monsanto has taken in nearly 600 tons of the soya bean crop from the trial plots this year, researchers assert that it can be used in spreads, yogurts, cereal bars and salad dressings. Some food companies have also taken the crop for development and researchers are hopeful that the US Food and Drug Administration should approve it for consumption by 2011 after which it should soon reach US supermarkets.

The present study is a small scale study and experts are now working on a wider study that would help them clearly ascertain the health benefits of GM soya bean.

The research is published in the journal Lipids.