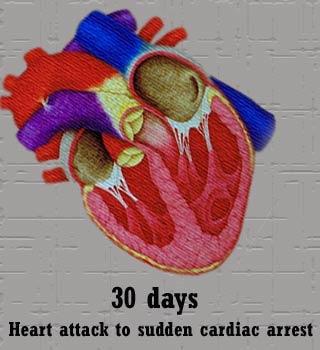 A new research by scientists at the Mayo Clinic reveals that people who have suffered a heart attack have the highest risks of experiencing death from sudden cardiac arrest.

The first 30 days after a heart attack researchers assert are of great danger with the risks eventually reducing over a period of time. The long term community study looked at nearly 3000 heart attack survivors Olmsted County in Minnesota. These were individuals who had suffered from a heart attack between 1979 and 2005.

Reviewing integrated databases of the patient records, researchers found that people leaving the hospital after surviving a heart attack need to stay alert at least for a month as they are at greatest risk of dying from sudden. The reasons could be no timely treatment given including cardiopulmonary resuscitation and defibrillation that is known to restore the heart’s malfunctioning.

“There are three key findings here that can be immediately applied to heart attack patients today. One is that the first month post-heart attack is the highest risk period for patients to suffer sudden cardiac death – and acute surveillance is warranted,” mentioned Lead author of the study, Dr. Veronique Roger, a professor of medicine and epidemiology at the Mayo Clinic.

Experts suggest over the past three decades there has been a noteworthy improvement in the risk of sudden death after a heart attack. However the period of first 30 days patients need to see the high sign as it is a period of danger. The researchers recommend doctors and patients to communicate efficiently in the first one month following a heart attack. Shortness of breath, fatigue, persistent coughing or wheezing, bloating and swelling are some common symptoms of heart failure.

Considered to be one of the largest and all-inclusive community studies, the findings are published the Nov. 5 edition of Journal of the American Medical Association.