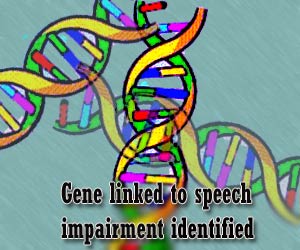 Nearly 7% of pre school children are affected by language disorder. However a novel research brings in some much needed hope for children on the front seat of language disorder. Scientists from the Wellcome Trust Center for Human Genetics at Oxford University claimed to have found the gene responsible for speech impairment in children.

Specific language impairment (SLI) also called as childhood language disorder as the condition is more prominent in children is an unexplained difficulty with language and may include repetition of nonsensical words.

The researchers have now been able to identify variants of the CNTNAP2 gene to be linked with this disorder. The study reveals that the gene plays a significant part in common SLIs primarily those inherited. The gene has also been recognised to play a role in autism and attention hyperactivity disorder (AHD).

“This is the first time anyone has pinpointed a specific gene that is involved in common forms of language impairments,” mentioned University of Oxford geneticist and Wellcome Trust researcher Simon Fisher, who led the study.

According to researcher Karin Stromswold at Rutgers University in New Jersey, “The fact that attention deficit disordered children and autistic children have motor delays makes me a little bit worried that what was picked is not a gene that is specific to language, but a gene that affects motor skills [that] is impacting language as well.”

A study of 184 families with cases of common speech impairments helped researchers ascertain the gene’s role in the disorder. Though the researchers conclude that defective CNTNAP2 gene is more prominent in children with both simple and severe speech impairments, there is quite a possibility that the condition could also involve more than one gene.

The researchers are however unaware of how exactly the gene could be affecting language skills. They are in fact trying look deeper for the interference of the newly discovered CNTNAP2 gene in children’s language development skills.

An earlier study by the Oxford research team had brought under the scanner another gene, called FOXP2. Experts discovered the FOXP2 gene to be abnormally present in children with severely delayed speech, like autism, though it had no link to mild speech impairments that controls other genes in the brain.

This week’s edition of The New England Journal of Medicine has published this study.