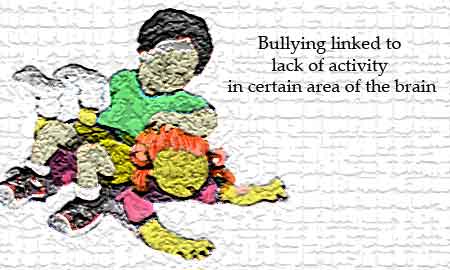 A new study states that kids who bully derive pleasure from others pain. In other words they thrive on other people’s pain. As per a new research, it states that a lack of activity in certain area of the brain could be the reason for bullying.

Benjamin Lahey is a psychologist at the University of Chicago and also the co-author of this study. Their research was published in the new issue of the journal Biological Psychology. Earlier studies had shown that when non-bullies see other’s in pain, the same area of the brain lights up, as it would when the non-bullies themselves experience pain. They showed a sign of empathy. However, Lahey and his co researchers were surprised to find out that the area in the bullies’ brains were even more active than in the non-bullies, but in a completely different way. The bullies derived pleasure from other people’s pain. Lahey says, “We think it means that they like seeing people in pain. If that is true, they are getting positively reinforced every time they bully and are aggressive to other people.”

The researchers had expected the bullies have an indifferent response when they witnessed somebody else’s pain. In other words they would feel detached or experience a kind of emotional coldness that leaves them guilt-free about harassing other people. Contrary to earlier beliefs, the bullies’ empathetic response seemed to be triggered by an activity in the amygdala and ventral striatum regions of the brain. These regions are said to be associated with reward and pleasure. Other than these regions, the scans showed that a portion of the brain that helps regulate emotion is inactive in bullies. In other words, some bullies lack a mechanism required to control their emotions when agitated. It is believed that some areas of the brain involved in self-regulation in bullies did not show any activation. These areas are known as the medial prefrontal cortex and the temporoparietal junction. Lahey and his co workers are trying to develop a cure to either treat this emotional agitation or to somehow balance this emotional upheaval. Due to their inability to control these emotions, bullies get positively inclined when they incur pain on others.

This research was conducted on 16-18 yr old boys suffering from aggressive disorderly conduct, in scientific terms. Their reactions were compared to subjects who were not normally aggressive. The researchers showed some videos to all these boys in order to note their reaction and measure their brain activity. These videos depict unintentional accidents like dropping a hammer on someone’s toe, etc; or intentionally derive pain to others. The aggressive teenagers reacted more strongly to pain that was accidentally inflicted on others.

Through functional MRI scans the subject’s brain activity and reactions were measured. This is the first study to use brain scans for better understanding of the bullies and non-bullies brain activity. If not treated, these children will grow up into adults suffering from anti-social personality disorder.

Dr Michael Eslea, senior lecturer in psychology at the University of Central Lancashire says, “A better understanding of the biological basis of these things is good to have but the danger is it causes people to leap to biological solutions – drugs – rather than other behavioural solutions.”

An in depth analysis of this topic will definitely guide researchers and psychiatrists to better understand and guide juveniles who are prone to pose a threat to other people and to the society as a whole. This study is a step forward in understanding empathy and its mechanisms.