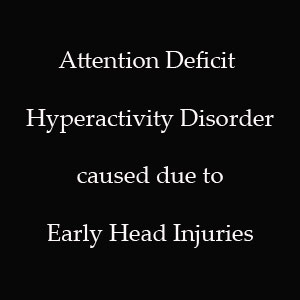 A study published in the current issue of the British Medical Journal, indicates that children who have suffered injuries, particularly head injuries or burns, before the age of two, are more prone to develop Attention Deficit Hyperactivity Disorder (ADHD) before the age of ten. Injuries in children in general make them vulnerable to ADHD behavior. This information was taken from about 300 general practices over a 15-year period.
Though these two variables are linked, it is still not clear as to which variable is responsible for the other. It is even assumed that a third variable is present which is responsible for both.

The cause of ADHD is still not known. The National Institute for Health and Clinical Excellence guidelines believe that other than genetics, external factors like injury or even maternal smoking may cause ADHD.

Dr. Jon A. Shaw, director of the Division of Child and Adolescent Psychiatry and Behavioral Sciences at the University of Miami, says that it is proved that ADHD is a heritable disease. Around 85% of ADHD children have a family history of ADHD. “Children with ADHD are impulsive, hyperactive, distractible and inattentive, and are accident-prone, and thus more likely to put themselves at risk for injury,” he said.

Keenan says, “Children with early injury should receive routine developmental and behavioral surveillance by their pediatrician, as well as injury prevention counseling. Early injury may be an indicator of attention problems in some children.” However, Professor Steve Field, chair of the Royal College of GPs, says it’s “very difficult” to diagnose ADHD.

This condition is said to affect twice as many boys than girls. These patients usually suffer from hyperactivity, forgetfulness, poor impulse control and distractibility among other things. Though environmental factors surely influence the severity of this condition, ADHD is not a result of poor parenting, family problems, or bad teachers or schools.