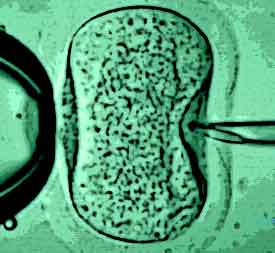 The researchers at Colorado Centre for Reproductive Medicine, US had conducted a clinical trial. An embryo quality test was developed to increase infertile couple’s chances of begetting children through IVF by 50%. In a new study, experts from Oxford University analyzed these results.

23 women’s embryos were genetically screened with this technology. Out of them two have given birth, sixteen are currently pregnant and have passed the point where miscarriages typically occur and two had miscarriages while pregnant. All the women were of an average of 37. They all had a history of failed IVF attempts or miscarriages. Thus to have a 78% success rate is excellent progress.

This technique called the comparative genomic hybridization (CGH), allows the doctor to analyze the quality of eggs before fertilization. It is believed that most miscarriages occur mainly because of an embryo carrying an unusual number of chromosomes. With age women’s chances of undergoing this problem increases as well. This technology can screen all 23 pairs of chromosomes, unlike only ten with the previous techniques.

The subject’s eggs are fertilized. The consequential embryos were grown till they qualified to the next stage, the blastocyst stage. It takes the embryos five days to reach this stage. The new technology tests IVF embryos when they reach this stage. This allows extra cells to be removed for genetic analysis, thus increasing the accuracy rate.

Dagan Wells of the University of Oxford is the lead researcher in this procedure. He says, “Chromosomal abnormalities are the main cause of implantation failure and miscarriage, and a way of detecting them should improve success rates. There is a dramatic change in implantation rate with this technology.” Dr Wells further says, “The pregnancy rates we’ve got so far are absolutely phenomenal. That means that you’ve got a much better chance of a pregnancy if you do a single embryo transfer.” This means that the chance of a single embryo leading to pregnancy is higher. The HFEA has come up with a way to promote single embryo transfer, in order to prevent twin and triplet pregnancies, the biggest health risks of IVF.

Dr. Wells has applied to the Human Fertilisation and Embryology Authority (HFEA), to offer the test at the Oxford Fertility Unit. This test will cost approximately £2,000 per screening.