According to a new research at the University of Illinois at Chicago, exposure to smoke can increase the level of stress hormones in the heart which can modify the shape of the left ventricle and also an increase in an activated enzyme found in the heart muscles was noticed. 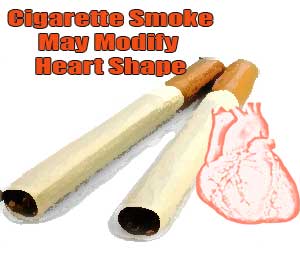 The researchers used rats in their experiments. These rats were exposed to cigarette smoke for a period of five weeks. After the completion of these five weeks the rats were examined through echocardiography. The activation of a few enzymes was noted. They are called mitogen-activated protein kinases. These enzymes are said to manage cell growth and the survival of heart muscles. The results revealed that long exposure to cigarette smoke can modify the shape of the hearts left ventricle among other effects. Researchers also found an increased level of the hormone, nonrepinephrine, in the animal’s urine sample. This hormone is released when a stressful event causes a lot of physiological changes.

Mariann Piano, professor of biobehavioral health science in the UIC College of Nursing and the lead researcher of this study says that activation of these enzymes maybe the main culprit in a cigarette smoke-caused heart disease. She says, “Cigarette smoke contains more than 4,000 different chemicals, one of which is nicotine. However, the effect of nicotine on the initiation and progression of cigarette smoke-mediated cardiovascular events remains controversial.”

According to Piano, the need to mainly study cigarette smoke arose from the fact that the data of nicotine replacement therapies accumulated from clinical trials does not show a greater cardiovascular risk even in patients suffering from cardiovascular diseases.

According to Piano, this is the first study of its kind to present that ventricular reshaping was due to cigarette smoke; and also that this was the main reason for the activation of mitogen-activated protein kinases. Piano received the American Heart Association’s 2008 Katharine A. Lembright Award for her research.

This study was funded by the National Institutes of Health. It was published in the European Journal of Heart Failure.