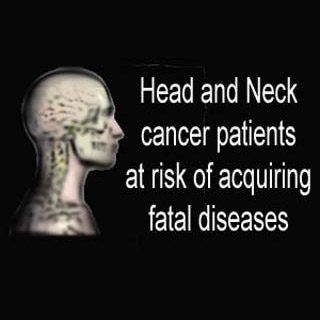 In a recent study it is stated that there is an increased risk of death when patients with neck and head cancer develop new or co-existing diseases like diabetes, lung disorders or heart problems; after being diagnosed with cancer. This study is the first to look at the co-morbidities in head and neck cancer patients in the period preceding diagnosis.

A head and neck specialist at Washington University School of Medicine in St. Louis, the Siteman Cancer Center and Barnes-Jewish Hospital, Jay Piccirillo, M.D., says that the mortality rate of these cancer patients are low because they don’t consider the other ailments developed in addition to their primary cancer. The patients risk of death increased by up to seven times because they overlooked the effects of the other co-morbidities, according to Piccirillo.

Head and neck cancer can be caused by smoking tobacco products and consuming alcohol. Some studies show that, smoking and alcohol together can increase the risk of the development of these cancers by more than 30 times.

In a latest study, the director of the Clinical Outcomes Research Office at Washington University School of Medicine and the Professor of Otolaryngology, Piccirillo says that, “For decades, we have used a cancer staging system based on tumor size, lymph node involvement and whether cancer has spread to other parts of the body when estimating a patient’s survival while mostly ignoring how sick patients are from other diseases. In fact, national databases used to estimate cancer survival don’t account for comorbidities, and as a result, we don’t have very accurate estimates of how long patients are likely to survive their cancers.”

Piccirillo said, “There are a lot of reasons an accurate prognosis is valuable to patients. Do you start thinking about palliative care? Do you retire to spend more time with family? Do you make changes in your behavior such as exercising more, eating better or quitting smoking?” Incorrect statistics challenge the physician’s capability to treat the patient correctly.

It is stated that in the United States, with lung and colorectal cancer patients leading the way for the most concurrent health problem, head and neck cancer patients follow them in their path with almost the highest rate of co-morbidities.

The researchers studied the medical records of more than 100 patients. These patients suffered from squamous cell carcinoma of the oral cavity, larynx and throat. Their co-morbidities include heart attack, coronary artery disease, psychiatric disease, stroke, diabetes and alcohol abuse. Many of these ailments are linked with smoking or alcohol consumption. The study also showed that around 33 percent of the head and neck cancer patients developed new ailments or a worsening of existing co-morbid ailments after diagnosis.

Piccirillo says, “We are getting better at curing cancer, so we have an exponential increase in the numbers of cancer survivors. Survivors have begun recognizing that the medical profession has not paid enough attention to the consequences of cancer and of cancer treatment.”

The most common ailment developed were malignant tumors, which were not related to the primary cancer and psychiatric illness. The type of treatment received had no particular effect on the number or severity of co-morbidities.

This study was published in the Archives of Otolaryngology, Head and Neck Surgery issue.