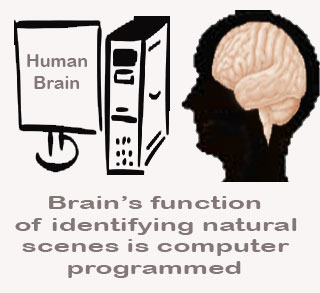 Carnegie Mellon University’s computational neuroscientists have come up with an innovative way to unveil the goings on of the brain’s visual cortex. They have designed a computational model that aids them in understanding the functions of the visual cortex and also the processed data through which people can witness different surfaces and contours, and basically understand what they see all around them in the world.

The human brain very easily makes the visual stimuli interpretations; however the computer scientists have been trying very hard to program computers to perform similarly. Michael S. Lewicki, associate professor in Carnegie Mellon’s Computer Science Department and the Center for the Neural Basis of Cognition, says that, simple cells which belong to the family of visual neuron can identify edges or lines. However, their performed computation does not suffice enough in order to make sense of natural scenes. He further says that, inside the scene, mostly edges are hidden by the background and foreground surfaces. Thus, a more enhanced processing is needed to make sense of the whole picture. However, the process through which the visual system undergoes this act is a mystery.

Lewicki was assisted by Yan Karklin, his graduate student. Together they designed this computational model of this visual processing. This model makes use of an algorithm that analyzes the innumerable patterns that compose natural scenes and it statistically characterizes those patterns. This is done in order to find out which patterns are presumably linked to each other.

Lewicki says, “Our model takes a statistical approach to making these generalizations about each patch in the image. We don’t know if the visual system computes exactly in this way, but it is behaving as if it is.” Karklin and Lewicki say that, the response of their model neurons to the images used in physiological experiments tallies with the response of neurons in the higher visual stages. These cells have a very complex response property. Thus they have been studied at length, but their function in visual processing is not very clear yet.

It is said that computers have difficulty identifying objects and making sense of their three-dimensional nature, unlike the human brain. It is stated that a better understanding of the way the brain sees the world could help in designing enhanced computer vision systems.

The functional explanation provided by the computer model, of the complex cells, can prove to be very useful to the scientists in coming up with innovative ways to decode the functions of the visual system and the other parts of the brain. It is stated that after the confirmation of this provided theory, scientists can set a pattern for the process of deriving the general from the specific.

Their findings were published online in the Nature journal.