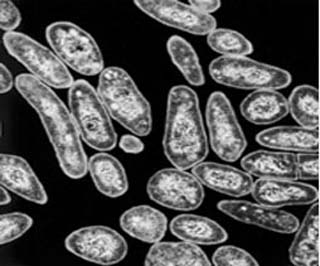 International team of biochemists has revealed the process of an experimental drug, which releases its destructive energy inside the tuberculosis (TB) causing bacteria. This could be of major help to the scientists in better understanding of the TB infections and ways of treating them, and also aid them in developing a drug against other bacteria as well.

The research was led by Clifton E. Barry, III, Ph.D., of the National Institute of Allergy and Infectious Diseases. He was assisted by the scientists from NIAID and from the Novartis Institute for Tropical Diseases in Singapore.

Mycobacterium tuberculosis (M. tb), bacteria causing TB, infects around one third of the world’s population. Anthony S. Fauci, M.D., the Director of NIAID says that, “Currently, there are no drugs available that specifically target latent tuberculosis infections in which bacteria are present but are not actively dividing. Dr. Barry and his colleagues have now given us a detailed picture of how the candidate TB drug PA-824 is metabolized inside Mycobacterium tuberculosis. Their discovery is a promising step towards developing effective drugs against latent TB as well as other bacteria.”

Dr. Barry and his team had earlier discovered that M. tb mutants were immune to PA-824. M. tb was found to be lacking a specific bacterial enzyme; however, the team did not know the function of this enzyme. Dr Barry says that, “It took several years, but at last we were able to recreate in the test tube what happens inside mycobacterial cells when the bacterial enzyme, which we named Ddn, and a second bacterial component called a cofactor, interact with PA-824.” The production of nitric oxide (NO) gas is the main event in PA-824 metabolism. Dr. Barry says that this reactive molecule is very similar to a bomb blast that destroys the bacteria from inside.

After the immune system cells entrap M. tb or any other bacteria, NO gas is said to be produced naturally. This is believed to be one way through which healthy people with healthy immune systems can contain M. tb infection. But it is also stated that this healthy immune response is not sufficient to free the body from TB bacteria. The effects that the NO producing immune cells have are similar to the effects of the PA-824. PA-824 is said to be more specific and only after it enters the infected bacteria does it trigger.

PA-824 was designed to work under aerobic or oxygenated conditions, originally. The scientists have decoded the effect of bacterial enzyme and cofactor on PA-824 under low oxygen conditions. Thus, according to Dr. Barry, with this understanding, the scientists can design drugs accordingly. They can design drugs that share the same chemical structure as PA-824, but enhance them in such a way that they perform very well under low-oxygen conditions. Some laboratories have started working on this process. The laboratories at NIAID, in collaboration with the Novartis Institute for Tropical Diseases in Singapore, along with the scientist from the Genomics Institute of the Novartis Research Foundation in San Diego have started working on this.

PA-824 has no effect on human cells since humans don’t have the bacterial cofactor or any enzymes similar to Ddn. On the other hand, it is stated that many bacteria have enzymes belonging to the same genre as Ddn. Therefore, Dr. Barry believes that new types of NO-generating drugs can be developed, which are specially designed to interact with enzymes linked with bacteria causing other diseases as well.

Their findings are published in the Science issue.