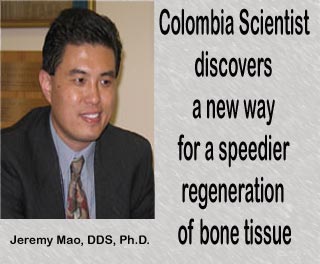 The Columbia University Medical Center researchers have come up with an innovative way to “grow” bone and other tissues, with the help of stem cell lines that are not typically combined.

Angiogenesis is a physiological process where there is a growth of new blood vessels from the already existing vessels. The failure to nurture this process was a huge barrier in tissue regeneration.

This approach was initiated by Jeremy Mao, DDS, Ph.D. It’s stated that, the approach of using both the mesenchymal and hematopoietic cells together in healing of defects or treating a disease, has rarely been seen. This could be because of the different research communities where these specific cell groups are analyzed.

Dr. Mao says, “The work has potential beyond bones and may have implications for the growth of muscle, nerve and organs. The synergistic action of mesenchymal cells and hematopoietic cells provide an alternative approach for regrowing a host of vascular tissues.”

A team of Colombia researchers, apparently, co-transplanted the hematopoietic and mesenchymal stem/progenitor cells, in order to promote the regeneration of vascularized tissues. They are said to have found that, supposedly, in bone the regeneration of tissue was faster as when either type of stem cell was used individually.

Dr. Mao and his team also discovered that the number and diameter of vessels, produced by the co-transplantation of hematopoietic and mesenchymal, in order to create vascularized tissue, increased greatly when they were combined with the Vascular Endothelial Growth Factor or VEGF.

Their findings are published in the Public Libraries of Science.