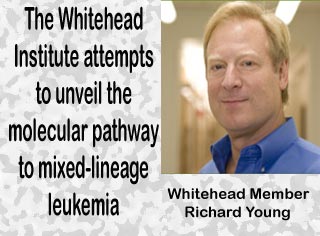 Usually blood cancer mixed-lineage leukemia patients, evidently, have weak prognosis. It’s even stated that infants suffering from this disease may probably die before their first birthday. There are various ways of developing this disease; one of the most common ways is with the unison of the MLL and AF4 genes.

It’s stated that, when the MLL gene is combined with the AF4 gene, evidently, a powerful cancer causing oncogene is produced. The researchers, supposedly, knew that the protein created from the MLL-AF4 fusion may cause leukemia; however they could not accurately pin-point the process of the oncogene disrupted cells’ normal protein production.

Richard Young, a Whitehead Member and a professor of biology, Massachusetts Institute of Technology, says, “We think we’ve figured out a key piece of how this leukemia works. If we understand the molecular pathway for how the MLL-AF4 protein interacts with genes, it gives us a set of new target genes that might be used for drug development.”

Matthew Guenther, a postdoctoral researcher in Young’s laboratory, used the ChIP-seq (chromatin immuno-precipitation with DNA sequencing) technique, to monitor the oncongene’s activities and also to see where the MLL-AF4 protein comes in contact with the genome of a cell.

Guenther says, “The MLL-AF4 fusion protein is somehow targeted to a set of genes that essentially hijacks the blood stem cell machinery and makes that cell become cancerous, basically a younger-looking cell that is dividing much more than it should.”

Guenther revealed that, apparently, the MLL-AF4 protein, in cancer cells, holds on to about 226 genes. Apparently, it’s presumed that the MLL-AF4 interaction with the genes, influence these genes in a hyperactive state. This process is said to lead to an adverse effect.

It’s said that, a close inspection of the MLL-AF4 protein bound genes, revealed a different pattern of chromatin proteins in these genes. The DNA is coated over the chromatin proteins in the cell to control gene expression or epigenetic; and safely package DNA for cell division. It’s believed that the changes in chromatin structures can have some effect on the normal gene expression. Prior studies are said to have, evidently, linked chromatin mis-regulation to the spread of leukemia and other diseases causing cancer.

These findings may prove to be helpful to the scientists in coming up with new ways to treat this fatal disease.