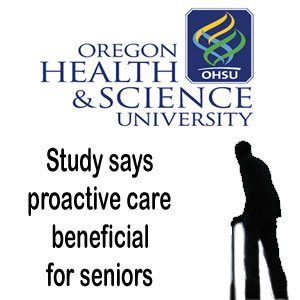 A recent study reveals that the hospitalization and death rates of chronically ill seniors, apparently decreases, if they have been registered in a proactive care management program, having facilities like electronic tracking, care coordination systems and also nurse care managers and interdisciplinary teams.

A three year study was conducted on more than 3,000 chronically ill seniors. This study was conducted at around 13 primary health care clinics at Intermountain Healthcare, Utah. They revealed that the patients receiving the best care, called the Care Management Plus (CMP), were at lower risk than the patients receiving the normal usual care. The average age of all the patients was 76, and maximum were believed to have two or more illnesses.

Study’s lead author, David A. Dorr, M.D., researcher of the Oregon Health & Science University, says, “This study underscores the enormous societal costs of a health care infrastructure that does not adequately support the interdisciplinary services and care coordination needed to prevent adverse outcomes for older adults with multiple chronic illnesses.”

Dorr further says that the patients who are suffering from two chronic health conditions, are said to be, apparently, more at risk and are probably, most likely to perish sooner than the ones suffering from one illness. On the other hand, someone having more than two chronic illnesses are said to, supposedly, have a 40 percent higher risk of perishing than the ones having only one illness.

CMP is said, to be of significant use for diabetic patients, who were faced with many more co-morbidities. At the CMP clinics, registered nurses were given additional training to operate computer tools. Patients with a complex criteria were directed to the nurse care manager were they were thoroughly examined, and a patient directed goal setting is said to have been kept in mind. The care manager suggests a change in medications or treatments when required.

The study authors say that care managers and various computer tools can enhance and improve the treatment required for the chronically ill seniors, keeping in mind their needs, as well.

The CMP system is said to have been undertaken by various clinics in the country in the past two decades.

The study was published in the Journal of the American Geriatrics Society.