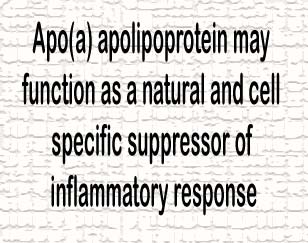 A latest study, in an attempt to outline the role played by apo(a) in leukocyte recruitment, has supposedly outlined the activity of apo(a) apolipoprotein, that may function as a natural and cell specific suppressor of the inflammatory response in vivo.

This study was conducted by Hoover-Plow and colleagues. Apparently, the apo(a) mechanism of selective regulation of cytokine production was also detected. It’s also stated that lipoprotein(a) (Lp(a)) is akin to the low density lipoprotein (LDL), only difference being an extra content of apolipoprotein, apo(a), in it.

Evidently, over the past 40 years, innumerable studies have been conducted, that have apparently pointed out Lp(a) as the risk factor for various cardiovascular pathologies. It’s stated that a lot of attention of the apo(a) pathogenic activities has supposedly focused on its resemblance to plasminogen. The plasminogen is supposedly the zymogen for plasmin, which is the primary enzyme for blood clot degradation.

“The impaired neutrophil recruitment occurred by a mechanism independent of plasminogen. While the clinical studies point to pathogenic functions of apo(a), a physiological role of Lp(a) has been elusive, but must exist to account for its role in humans and non-human primates, but not most other species. Our results indicate for the first time that apo(a), independent of plasminogen interaction, inhibits neutrophil recruitment in vivo and functions as a cell specific suppressor of the inflammatory response,” continues Hoover-Plow.

Supposedly, Lp(a) is expressed only in humans, non-human primates and the European hedgehog. It’s stated that due to less availability of small animal models, there are hurdles in the in vivo analysis of Lp(a) function. Hoover-Plow and team evidently made use of mice with apo(a) in a plasminogen deficient or replete background, in order to evidently evaluate the leukocyte recruitment in three models of inflammation.

The Editor-in-Chief of Experimental Biology and Medicine, Dr. Steven R. Goodman, says that Hoover-Plow and team have evidently revealed the crucial function of the apo(a) as an inflammation regulator. Apparently, this analysis could aid in the better understanding of the regulation of the neutrophil recruitment during inflammatory response.

Their findings are soon to be published in the Experimental Biology and Medicine issue.