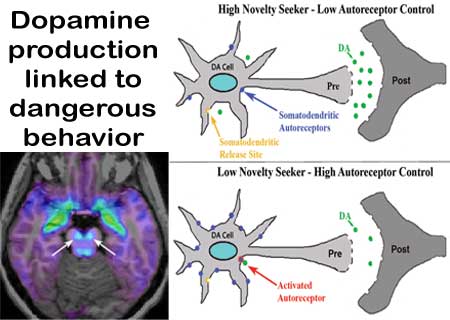 As we near New Year’s Eve, everyone must be busy preparing a list of New Year’s resolutions. These resolutions differ for different people. However, not all are successful in sticking faithfully to their list. Risk-takers and impulsive people’s resolution list usually is believed to include things like being more careful, or curbing dangerous behavior, like drug or alcohol abuse.

A latest Vanderbilt research states that the risk-takers and impulsive people face a difficult time sticking to their resolutions, because of the way their brain processes dopamine. Psychologists have named this category of people, novelty seekers.

This research reveals that the brain of these novelty seekers apparently contains dopamine receptor in less quantity, which urges them to get attracted to exciting and novel experiences.

Apparently a particular group of brain cells produces the neurotransmitter dopamine. It’s stated that these cells evidently have auto-receptors, which on cell stimulation, aids in curbing the amount of dopamine release.

Lead author, David Zald, associate professor of psychology, says, “We’ve found that the density of these dopamine autoreceptors is inversely related to an individual’s interest in and desire for novel experiences. The fewer available dopamine autoreceptors an individual has, the less they are able to regulate how much dopamine is released when these cells are engaged. Because of this, novelty and other potentially rewarding experiences that normally induce dopamine release will produce greater dopamine release in these individuals.”

Zald and his colleagues state that, “Our research suggests that in high novelty-seeking individuals, the brain is less able to regulate dopamine, and this may lead these individuals to be particularly responsive to novel and rewarding situations that normally induce dopamine release.”

The researchers measured the dopamine receptors level of around 34 healthy human beings through positron emission topography. These subjects evidently also had to fill out a questionnaire that measured the novelty-seeking personality trait. It’s stated that seemingly the higher the score the higher that person was likely to turn out to be a novelty seeker. It was also discovered that the higher scored people had lower levels of dopamine auto-receptor availability as compared to the low scored subjects.

It’s evidently a known fact that dopamine has been linked with the pleasure derived from food, sex and drugs. Seemingly previous research has revealed that dopamine levels vary in different people, and this difference in the number of dopamine receptors and the amount of produced dopamine is the main reason behind certain addictions.

This research is published in the Journal of Neuroscience.