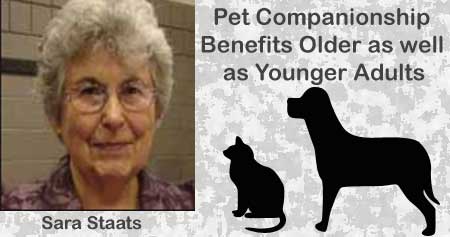 Benefits of pet companionship in the life of the chronically ill or aging people have already been highlighted in prior researches. A latest Ohio State University study now says that owning of pets aids college students as well. It apparently helps them handle various stressful situations more easily.

A survey was conducted in a university, and various students and adults in general were questioned. People aging from 18 to 87 were surveyed, in order to evaluate the differences between students and adults. Evidently one fourth of the college students believed that their pets helped them get through a hard phase in life. Supposedly, those people who presently or previously owned a dog, a cat, or a combination of the two were only surveyed in the study. It’s stated that the students, who lived with at least one dog, one cat or a combination of the two, were not very prone to feel depressed or lonely.

Lead author, Sara Staats, professor emeritus of psychology, Ohio State’s Newark Campus, says that, “We might not think of college students as being lonely, but a lot of freshman and sophomores are in an early transition from living at home to living in dorms or off-campus. College is a very stressful environment for them and sometimes they can feel isolated or overwhelmed with the change.” She continues, “We found that a lot of young adults are choosing to have an animal companion for important reasons. Many feel their pets will help get them through these difficult and stressful situations, and many more say that without their pet, they would feel lonely.”

Supposedly the main reason for pet companionship given by all the subjects was to avoid loneliness. Staats says that, in spite of the reason of pet ownership being the same for all the subjects of varying ages, their lifestyle may give a clearer picture of their dependence on their pet. Supposedly, younger adults feel the need for pet companionship more often than their older counterparts. Apparently, college students who are in the process of making new friends or are living far from home may feel isolated and lonely due to change in environment and situation. However adults usually have a network of friends and have adapted to the environment. They usually live in areas close to their friends, relatives, colleagues or family members, making their lives more stable than the one’s who are just beginning to build their lives. Thus it is stated that, supposedly younger adults rely on their pets more often than the older adults.

Staats says that this is a first study to evaluate the effects of animal companionship on younger people aging below 30.

Staats says that this study evidently gives a clear picture that animal companionship proves beneficial, psychologically as well as socially, for students or young adults.

Their results are published in the Society and Animals journal.