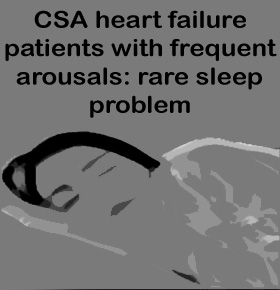 A latest study states that the occurrence of frequent arousals in patients suffering from heart failure as well as central sleep apnea (CSA) may not be their defense mechanism against apneas. It may hint at the presence of another arousal disorder.

This information was evidently accumulated from around more than 200 CSA heart failure patients enrolled in a particular randomized, multi-center clinical trial. Trial participants were apparently aged from 18 to 79. Evidently they were randomly placed in either the CPAP treatment group or a control group. This treatment was seemingly continued for about a period of three months.

Douglas Bradley, professor of medicine, University of Toronto, and also lead investigator of the study says that they were all evidently astounded that CSA treatment with continuous positive airway pressure (CPAP), seemingly did not effect arousals and sleep structure.

It’s stated that in obstructive sleep apnea (OSA) patients, arousals are believed to be a crucial defense mechanism, against apneas. It’s even said that the treatment of these patients with CPAP evidently brings about an improvement in arousal frequency. Quite contrary to this, it’s stated that arousals in CSA heart failure patients most of the time takes place several breaths after apnea termination.

The authors presume that some CSA heart failure patient’s may have, “predisposition to hyperarousability.” While along with an underlying arousal disorder some may have sleep disruption as well, which may not have occurred as a result of CSA or heart failure.

At the end of the CPAP treatment, it was apparently revealed that in spite of the decrease in breathing pauses, the CSA heart failure patients showed no significant change in the occurrence of arousals or sleep structure.

Their findings are published in the Sleep journal.