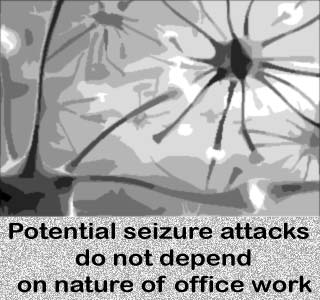 Epileptics usually have to go through a difficult time at work place as well as in their daily routine life. Occurrence of stress related sudden unexpected seizures makes it difficult for them to get hired by potential employers. Apparently many employers believe that a stressful workplace may trigger seizures in epileptics.

According to a latest Tel Aviv University study, this is apparently not the case at all. They state that evidently occupational stress is not the causal factor of epileptic attacks. Dr. Shlomo Moshe, TAU’s Sackler Faculty of Medicine, seemingly even advises physicians and employers crucial information as to how to evaluate health and safety of such employers. This is evidently believed to benefit those epileptic patient’s who have been seizure-free for a long period of time.

Dr. Moshe says that, “People are prejudiced against epileptics, who learn how hide their condition very well. It becomes a problem when they’re trying to get work, because most employers avoid hiring epileptics. But occupational physicians have been asking for years, ‘What are the real risks?’ Our new study provides the answer.”

Dr. Moshe’s study is believed to be the largest study of its kind to have been conducted on this issue. They are believed to have surveyed and compared more than 300,000 people with no past history of epilepsy, with around 16,000 epileptic patients.

Dr. Moshe on referring to the vast amount of data accumulated may be able to predict the occurrence and chances of seizure attacks. This is believed to be beneficial for the patients as well as their employers and insurance companies.

Dr. Moshe says, “We proved with very high levels of predictability that we can pinpoint the chances of a person having another seizure. For example, if we see that someone had their last attack as a child, we can show that their chances for a full remission of epilepsy are quite high.”

Apparently the Epilepsy Foundation estimates more than 3 million Americans to suffer from this disorder. It’s further estimated that one in every adult may face a seizure attack sometime in their lifetime. This disease seemingly has no cure. Evidently, in spite of reduction in seizures, society is prejudiced against this disorder.

The researchers, over a period of three years, analyzed the chances of occurrence of seizures in people based on the nature of their work, be it manual labor, combat fighting or office work.

Dr. Moshe says the nature of a person’s work apparently has no effect on the chances of seizure attacks. Apparently, the main predictor of seizure is the time when it had last occurred! He further says that the people, who haven’t suffered from seizures for the past five years, may not have to worry about such attacks.

Their findings are published in the Epilepsia journal.

Protein appears to be associated with troubles in executive thinking capabilities