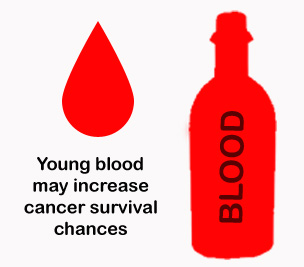 A latest research has revealed that young blood can play a major role in the fight against cancer. The Tel Aviv University researchers discovered that blood that has been stored for less than 9 days may yield better results in animals suffering from two types of cancer. This type of blood is called “young” blood.

Lead researcher, Professor Shamgar Ben-Eliyahu, Department of Psychology’s Neuroimmunology Research Unit, states that this discovery may answer some questions on the varying results of blood-transfusions during cancer-related surgeries. Apparently, in some surgeries blood-transfusion may or may not lead to cancer re-growth. This research hopes to provide answers to these questions.

Professor Ben-Eliyahu says that, “There is anecdotal evidence pointing to the fact that some surgeons really prefer to use younger blood units. They insist on it. Our research shows their reasoning might be sound.” He further says that, in a blood bank, blood maybe preserved for about 40-42 days, before it expires and is discarded.

Researchers conducted tests on rats suffering from leukemia and breast cancer. It was apparently discovered that the chances of survival were lower if the blood transfused was older than 9 days.

Professor Ben-Eliyahu says, “It might have a serious impact on the survival of prostate or colon cancers –– two cancers that are associated with a lot of bleeding. If our research proves to be true in human trials, it should revolutionize the way we look at transfusion in cancer patients.”

Evidently this research has made another crucial discovery. It’s revealed that earlier the surgeons used to seemingly believe that the transfusion of blood, from which a removal of white blood cells has been undertaken, may reduce the chances of harmful effects on the patient. But this research says otherwise. Seemingly, red blood cells are said to be responsible for occurrence of harmful effects in the patients.

“The age of the blood itself impacts survival. The best recipe for transfusions might be fresh blood from other people. We found no differences between autologous blood and blood from other donors. The latter can be stored for much shorter durations before use,” says Professor Ben-Eliyahu.

He however points out that the theory that “older” blood may cause an increase in cancer metastasis apparently remains controversial. He says the negative effects may be caused in only certain types of cancers and may not be the same in all.

The researchers suggest that only after the establishment that blood transfusion may be a risk factor in cancer recurrence, should more research be conducted on whether the storage duration of blood matters or not on the patient’s survival.

Professor Ben-Eliyahu says that this study may not influence hospitals and surgeons to change their procedures of surgery; however it apparently does require more research and a deeper in depth analysis of the issue to better understand it.

Their findings are published in the Anesthesiology journal.