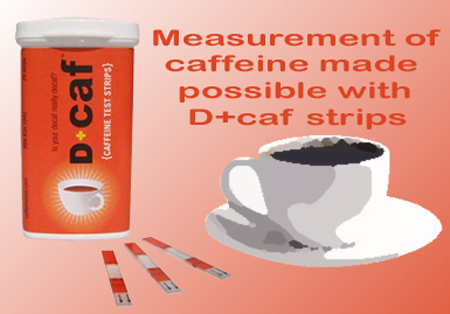 Have you ever wondered how much caffeine your daily cup of coffee or tea actually has? For those who are mindful about their caffeine intake, Silver Lake Research Corporation, Monrovia, California, has come up with the D+caf test strips that can evidently measure the amount of caffeine in your daily harmless cup of tea or coffee.

The D+caf test strips can apparently verify if a six ounce cup of joe has more than 20mg of caffeine. These strips soak up some of the fluid that they are immersed in, and in the presence of caffeine, they produce colored lines. Antibodies in the strip are said to be responsible for the production of these colored lines. The credit for designing these antibodies is given to the Silver Lake Research, its manufacturer.

The D+caf test strips are believed to have lab accurate test results! All the users have to do, is introduce the strip to a desired beverage whose caffeine concentration you wish to measure. Leave the rest to this unique product. It immediately produces colored lines if it detects caffeine in the drink.

There are said to be around 20 single-use strips in each packet of D+caf. The product boasts of a 98 percent accuracy rate of identifying “NON-DECAFFEINATED” drinks. That comes to around 20mg of caffeine in per 6 oz of serving. These strips apparently produce results in just about 30 seconds! It takes more time than that to actually get yourself a cup of coffee.

Irrespective of the type of caffeinated drinks consumed, the D+caf strips can be used in hot as well as cold beverages. These strips are advised to be used before the addition of milk, powdered creamers, cream or another other type additive.

It’s stated that around 30 percent of decaf coffees ordered from eateries, in reality may have a high caffeine concentration.

The next time you order yourself a cup of decaf coffee, with the help of these test strips, you actually have a way of ascertaining your coffee’s caffeine concentration.