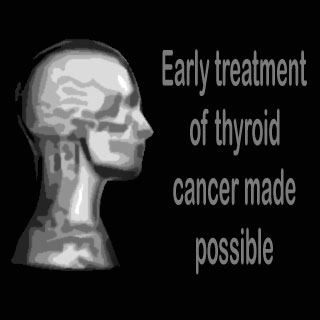 In an attempt to evaluate the diagnostic value of molecular imaging, in the nodal staging of thyroid cancer patient’s, a study was conducted by the researchers at the University of Erlangen-Nürnberg, Germany. They evidently successfully differentiated between the cancerous cells in regional lymph nodes and normal residual thyroid tissue, directly after surgery.

The differentiated thyroid carcinoma (DTC) patients, whose thyroid had been removed, were apparently treated with radioactive iodine. Imaging is possible mainly because of the radioactive iodine’s capability to emit particular photons.

The researchers made use of hybrid single photon emission computed tomography-computed tomography (SPECT-CT) camera, in an attempt to examine and identify the replication of cancerous cells to the close by lymph nodes.

Co-author, Torsten Kuwert, MD, says that, “Normal thyroid tissue as well as residual cancer cells concentrate radioiodine. Performed after ingestion of radioiodine, SPECT-CT provides three-dimensional images of the distribution of the radionuclide in the human body and is therefore used for staging this type of cancer. Incorporated at first treatment, SPECT-CT allows us to better stratify patients into treatment groups.”

Around more than 50 patients were given the radioiodine therapy, which was followed by SPECT imaging. Study authors say that, “With SPECT-CT imaging, we were able to determine tumor spread much earlier than before. Earlier detection will lead to earlier individualized treatment of this potentially deadly cancer.”

The American Cancer Society states that DTC is the most commonly diagnosed form of thyroid cancer. It may be encouraging to state that after the introduction of radioiodine therapy, this is also believed to be one of the most curable cancers.

The researchers state that curbing of metastasis in the regional lymph nodes, by treating the disease, may actually prove to reduce the recurrence risk in lymph node metastasis patients.

The authors suggest that SPEC-CT to be used as a routine test in DTC patients, at the time of their first radioiodine treatment. It’s stated that the process of downstaging and upstaging the disease may cause the SPEC-CT to possibly modify the supervision of an estimation of more than one-third of DTC patients. It’s stated that they can now differentiate between the healthy tissues and the cancerous lymph nodes in cancer patients.

Their findings are reported in The Journal of Nuclear Medicine issue.