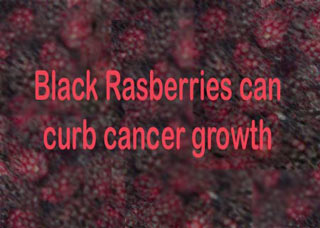 A new study detects certain elements in black raspberries that may have chemo-preventive capacity. This study was conducted by the Ohio State Comprehensive Cancer Center.

Anthocyanins are a set of flavonoids present in black raspberries, which are believed to have the capacity to curb development and stimulate apoptosis in the treated rat’s esophagus.

These rats were nourished with an anthocyanin-rich extract of black raspberries. It was discovered that this extract had about the same amount of anthocyanins as the whole black raspberry. The extract apparently was quite useful in curbing the growth of esophageal cancer in these rats.

It’s stated that this study highlights the anthocyanin significance in black raspberries, which may act as a preventive shield against cancer. It’s believed that this study is the first of its kind to have examined the link between anthocyanins and cancer prevention in vivo.

Apparently, these researchers have even conducted various clinical trails, using whole black raspberry powder. Positive results were gained here as well, however, the patient’s were required to consume about 60 grams of the powder daily.

Stoner says that the knowledge of the results yielded from anthocyanins, are similar to the results gained from whole black raspberries. This may prove to be very beneficial for the development of future treatments to be used in humans as well.

The authors’ main aim is to use the active components of the berry, instead of the whole berry powder. The next step would involve the discovery of a new approach in order to introduce these elements to the different tissues in the body. Their ultimate goal is to study the anthocyanin effects in the human body.

Their study was published in the American Association for Cancer Research’s journal, Cancer Prevention Research.