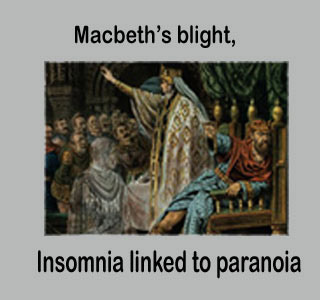 Shakespeare’s famous “Macbeth” is a classic. People all over the world have read and appreciated this particular work of art. Now a latest study has revealed that the disorder that the novel’s protagonist goes through wasn’t fictional. The researchers have evidently unveiled a connection between sleeplessness and paranoid thinking.

Insomnia is a very commonly affected disorder among the general population. Lack of sleep can have various adverse effects on an individual’s health. It can also cause anxiety, depression, and irritability among others. However, this study has gone a step forward and has unveiled another potential effect of insomnia, a presumption that people are purposely trying to harm them.

The study was conducted by Dr. Daniel Freeman, a Wellcome Trust Research Career Development Fellow, the Institute of Psychiatry, King’s College London. Their findings revealed that, as compared to others, insomniacs were five times more prone to suffer from paranoid thoughts.

Dr. Freeman says that, “As most of us know, a few nights of poor sleep can make us feel stressed, muddled in our thinking and disconnected from the world. These are ideal conditions for paranoid fears to take hold. Regular, good-quality sleep is important to our psychological wellbeing.”

In spite of having highlighted the connection between insomnia and paranoid thinking, it is still not clear as to which is the causal effect of the other. Dr. Freeman says that there are various forms of treatments presently available for insomnia, like cognitive behavioral therapy.

Dr. Freeman hopes that these findings may form the base of future treatments that can be used to curb the onset of paranoid feeling in people.

The study findings are published online in the Schizophrenia Research journal.