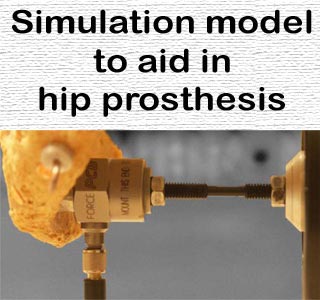 Attaching hip prostheses to bone may prove to be a complicated process. The outcome of such a procedure cannot be predicted before hand. To avoid complications, some surgeons, while referring to the patient’s computed tomography (CT) scan, determine the exact location in the bone, where screws can be driven in. A new model is to be computed that may be able to predict the best position for the screws to be driven in the patient’s hip bone.

It is stated that artificial hip joints are not permanent. They may have to be replaced if they come loose. However, another hindrance is that, due to prior use of the prosthesis, the pelvic bone may not be as strong as it used to be. Over age, the bone may have been damaged in several places and also lost some of its strength and elasticity. Presently doctors estimate the strength of the various bones in the patient, by going through their CT scan. In this way they presume the best potential location for hip prostheses. In spite of this, most of the times the simulation does not tally with the actual consistency of the injured bone.

The doctors have to take in to consideration the shape that the hip prosthesis has to be placed in, so that it fits snugly in its neighboring bones. They have to presume the best location which may be able to hold the artificial joint in place.

Engineers of the Fraunhofer Institute for Machine Tools and Forming Technology IWU in Dresden, in collaboration with the University of Leipzig, are in the midst of developing a new simulated model, which can aid doctors in gauging the bone density of the patient through their CT scan images. Apparently, with the help of this model, doctors may find it easier to accurately calculate the elasticity and density of the bone.

It’s also stated that for hip prosthesis, the researchers are making use of the methods mostly used in component testing. For example, these methods include oscillations in the bone. The researchers further say that this procedure cannot be tested on a patient. The bone is secured in an apparatus.

Martin Quickert, IWU group manager, says that, “The nature of the oscillations enables us to deduce local properties of the bone – such as its density and elasticity.” The researchers then compare the obtained results with the patient’s CT images; and with the help of the model, try to figure out the best potential hip joint location.

The researchers believe that this technique may prove to be very beneficial in determining the bone strength from CT images. They hope that in the coming years, doctors may be able to make use of a best quality simulation model from the patient’s CT images itself. They conclude that this hip prosthesis may be placed more accurately and thus last for a longer period of time.