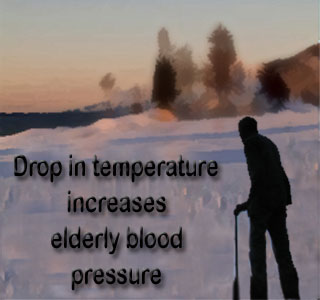 A latest study states that in cold climate, older adults may experience a higher rate of blood pressure. This change in blood pressure with varying climate is not a relatively new area of study. However, it is stated that not many of the previous studies have focused mainly on the elderly.

This study was conducted by Annick Alpérovitch, M.D., of the Institut National de la Santé et de la Récherche Médicale, Paris, and his colleagues. Together they evaluated and studied the link between seasonal and blood pressure changes. They studied more than 8,000 patients aged 65 or above.

The authors state that, “Elderly persons may be particularly susceptible to temperature-related variations in blood pressure. The baroreflex, which is one of the mechanisms of blood pressure regulation, is modified in elderly subjects, and it has been hypothesized that disorders of baroreflex control and enhanced vasoreactivity [sensitivity of blood vessels] could contribute to the aging-associated increase in cardiovascular morbidity [illness].”

The study subjects’ blood pressure and outdoor climate was measured once at the commencement of the study, and then again after 2 years. It was noticed that during the four seasons of the year, the systolic and the diastolic blood pressures varied with the differing climate. The average measured blood pressure was higher in winter as compared to summer.

“Mechanisms that could explain the association between blood pressure and temperature remain undetermined,” say the authors. They presume that in cold weather the sympathetic nervous system gets triggered and releases the catecholamine hormone. This could be the cause of a rise in blood pressure with a drop in the weather. The authors continue, “The higher the temperature at follow-up compared with baseline, the greater the decrease in blood pressure.” The variance over time were said to increase with an increase in age.

Their findings are published in the Archives of Internal Medicine, one of JAMA/Archives journals.

Impaired sense of Smell found to be a Marker of Parkinson’s...