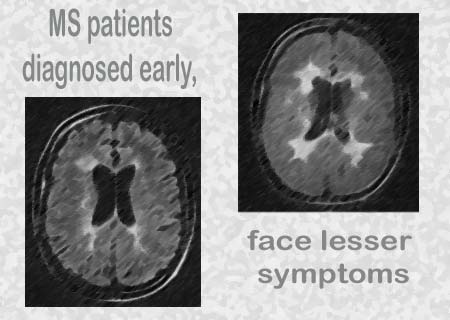 It is stated that usually MS affects people between the age group of 20 to 40. However, an estimated 10 percent of patients below the age of 18 have being diagnosed with this disease as well. Some patients experience a phase of MS symptoms followed by a phase of symptom-free remission. This relapsing-remitting is believed to be a very common form of MS.

More than 100 relapsing-remitting MS patients, evaluated for this study, were diagnosed at adulthood, while more than 20 were diagnosed with pediatric-onset MS. This study was conducted by Mark P. Gorman, MD, Brigham and Women’s Hospital and Massachusetts General Hospital, Boston; and his colleagues.

The authors state that the patients diagnosed in childhood, experienced a higher amount of relapse as compared to the patients diagnosed at adulthood. They continue that, “In general, the disease course of MS has been divided into a relapsing-remitting phase, during which inflammatory mechanisms predominate, and a secondary progressive phase, during which neurodegenerative mechanisms predominate.”

“Acute relapses are the clinical hallmark of the inflammatory phase of MS. The higher relapse rate in the pediatric-onset group in our study may therefore suggest that patients with pediatric-onset MS are coming to medical attention closer to the true biological onset of their disorder than patients with adult onset during a more inflammatory phase, as has been previously suggested,” they said.

The authors say that if diagnosis of the disease in childhood slows down the progression of the disease, then it suggests a probable greater plasticity, and lesser deterioration of the younger nervous system.

They conclude that a more detailed analysis is required in order to determine the cause of the differing disease progression in younger nervous system as compared to the older nervous system.

Their findings are published in one of JAMA/Archives journals, the Archives of Neurology.