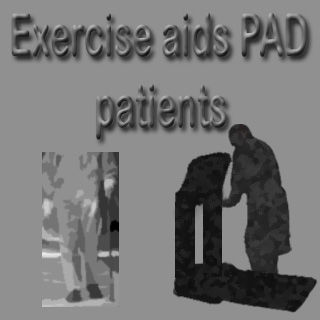 Peripheral arterial disease (PAD) patients feel deprived of the happiness of doing simple things of life like grocery shopping, going out on family picnics, walking in the garden, etc. A latest clinical trial by Northwestern University’s Feinberg School of Medicine has given new hope to PAD patients. They say that regular supervised exercises could bring about an improvement in such patients.

This is believed to be the first study of its kind to reveal that exercise helps PAD patients with calf pain, in improving their ability to walk. Earlier studies are said to have taken into consideration the benefits of treadmill walking for patients with typical leg pain. However there are a few PAD patients who do not face these symptoms.

Principal investigator, Mary M. McDermott, MD, professor of medicine, Feinberg School; and also a physician at the Northwestern Memorial Hospital, says that, “This is an important new finding for patients with PAD. People said it was much easier for them to walk. The study shows it’s important for physicians to recommend supervised treadmill exercise to all their PAD patients, whether or not they have typical symptoms.” McDermott also says that PAD patients should consider doing leg strength training as a type of an added secondary therapy.

A randomized clinical trail was conducted for six months on about 156 PAD patients, aged averagely 73. These patients were randomly placed in a supervised treadmill exercise regime, leg resistance training or a control group.

After the completion of the trial, the treadmill group could walk for an additional 69 feet distance in the six-minute walk test than they could walk at the beginning of the trail. On the other hand, the control group subjects reduced their covered distance by 49 feet.

McDermott says that the health of the arm brachial artery patients in the treadmill group improved, thus revealing an improvement in their overall cardiovascular well being. She says that, an improvement noticed in some of the patients may be due to the development of new arteries in their legs. Growth of these arteries may have taken place due to the hearts pumping of oxygen to their legs as a result of the supervised exercise regime. Having said that, it is also stated that the trial was not conducted in an attempt to verify which of these exercise regimes brought about an improvement in PAD patients.

McDermott suggests patients to train under a trainer, in order to improve their health. It is better to exercise than do nothing at all, right?

This study was published in the Journal of the American Medical Association.