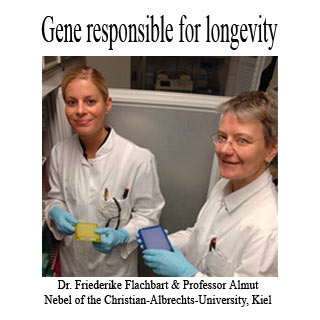 Have you ever wondered why some people outlive others? And why, as compared to others only some people live to see their 100th birthday?

The credit for the increased life expectancy of such people may be given to a variation in their FOXO3A gene. This theory has even been confirmed by a latest study conducted by the scientists in the Faculty of Medicine, Christian-Albrechts-University in Kiel.

An earlier conducted study on this issue had highlighted the higher number of these genetic variations in some long-lived subjects. Professor Almut Nebel from Kiel says, “That published result is only of scientific value if it can be confirmed in a study with an independently chosen sample population. Without that there must still remain a tinge of doubt. We have now eliminated that uncertainty about the connection between FOXO3A and longevity, both by our results from the German sample study and by the support from our French partners in Paris, whose research on French centenarians showed the same trend.”

“This discovery is of particular importance as there are genetic differences between Japanese and European people. We can now conclude that this gene is probably important as a factor in longevity throughout the world,” he said.

The scientists of the present study analyzed and compared the DNA samples taken from around 388 German centenarians, with the samples taken from about 731 younger subjects. Study author, Dr. Friederike Flachsbart, Institute of Clinical Molecular Biology, Kiel University says one problem that they had to face was to convince the older subjects to participate in the study. She further states that the genetic variation in the 100 year old subjects were more clearly visible as compared to the 95 year olds.

The FOXO3A gene had grasped the attention of various genetic researchers on ageing. It was pointed out that this gene was somehow associated with the ageing process in worms and flies. The Kiel researchers’ interest in this gene may be attributed to those revelations.

Their findings are published in the Proceedings of the National Academy of Sciences journal.