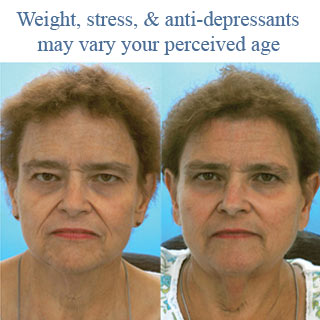 The way a person’s mother has aged may not necessarily be applicable to that individual as well. The ageing process of that individual may vary as per their genetic and environmental factors, according to a latest study conducted on identical twins. This study was conducted by the American Society of Plastic Surgeons.

This study evaluated the process of ageing in identical twins. They state that in spite of being programmed genetically to age similarly, various external factors may add years to an individual’s perceived age. Factors like divorce or the use of anti-depressants are believed to be the main factors responsible for adding to one’s perceived age.

Study author, Bahaman Guyuron, MD, professor and chairman, department of plastic surgery, University Hospitals Case Medical Center, says that, “A person’s heritage may initially dictate how they age – but if you introduce certain factors into your life, you will certainly age faster. Likewise, if you avoid those factors you can slow down the hands of time. In this study, we looked at identical twins because they are genetically programmed to age exactly the same, and in doing so we essentially discovered that, when it comes to your face, it is possible to cheat your biological clock.”

The study investigators referred to certain comprehensive questionnaires and digital images of around 186 pairs of identical twins. These images were assessed by an independent panel, which recorded the perceived age difference between the sibling subjects.

The obtained results revealed that the ones who had been divorced looked two years older than their twin, who was either married, or single or maybe even widowed. Another factor that added to the perceived age was the use of anti-depressants. It is further said that weight also contributed to the difference in perceived age.

In the twins below 40 years of age, the heavier twin seemed older; while in the twins above the age of 40, the heavier twin looked younger. The investigators believe that stress could also be credited for the difference in the perceived age of the older looking twin. Anti-depressants, due to its continuous relaxation of the face muscles, may be the culprit responsible for sagging of the face, which also adds to one’s perceived age.

Dr. Guyuron says that, “This research is important for two reasons. First, we have discovered a number of new factors that contribute to aging and second, our findings put science behind the idea that volume replacement rejuvenates the face.”

The investigators make themselves clear by mentioning that they do not mean to encourage weight gain in order to look younger; however they also say that losing a significant amount of weight unnaturally may have adverse effects on that particular individual’s health and appearance too.

Their findings are published on the web-based version of Plastic and Reconstructive Surgery, which is the official medical journal of the American Society of Plastic Surgeons.