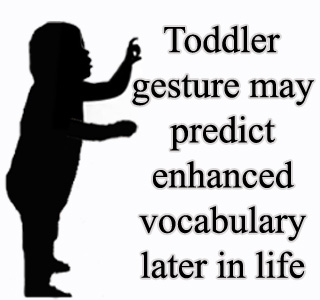 A latest study states that those 14 month old children, who use gestures, are more likely to have a better vocabulary by the time they reach school age, as compared to the other children. It is also stated that the child’s family income is also a very essential deciding criterion for the same. This study was conducted by the researchers at the University of Chicago.

About 50 families from diverse economic backgrounds were studied for this purpose. The study investigators recorded a video of the toddlers and primary caregivers during their routine ordinary activities at home for about an hour and a half.

Goldin-Meadow, the Beardsley Ruml Distinguished Service Professor in Psychology at the University says that, “Vocabulary is a key predictor of school success and is a primary reason why children from low-income families enter school at a greater risk of failure than their peers from advantaged families.”

Study co-author, Meredith Rowe, psychologist, says that, “It is striking that, in the initial stages of language learning when SES (socioeconomic status) differences in children’s spoken vocabulary are not yet evident, we see SES differences in child gesture use. Children typically do not begin gesturing until around 10 months. Thus, SES differences are evident a mere four months, and possibly even sooner, after the onset of child gesture production.”

The study authors state that, “Child gesture could play an indirect role in word learning by eliciting timely speech from parents; for example, in response to her child’s point at the doll, mother might say, ‘yes, that’s a doll,’ thus providing a word for the object that is the focus of the child’s attention.”

This paper did not assess the precise connection between early childhood gesture and later child vocabulary. However they also state that encouraging gesture usage between parents and their children, who are learning to speak, may enhance the child’s vocabulary and thus ready the child for school.

Their findings are published in the Science journal.