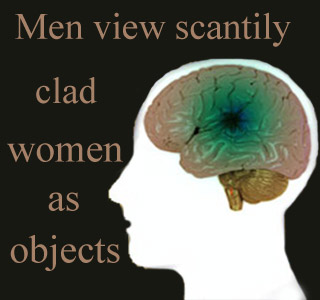 A new study has stated that men view attractive women in swim wear as sex objects. Some men see bikini clad women as objects rather than independent human beings with their own desires and intentions. This study was led by Susan Fiske, a psychologist at the Princeton University in New Jersey.

The brains of about 21 students were scanned with an MRI machine, while they were shown images of women in swim wear. The purpose of doing so was to witness the brain activity in these subjects. The subjects were shown images of both men and women, some of whom were fully clothed, while some were scantily clothed. It was noticed that the area of the brain that usually responds for objects, lit up while viewing the images of scantily clad women. It was also noticed that the subjects could better recollect those images of women wearing swimsuits as compared to the rest. Also these men could better remember the bodies as compared to the faces of these women.

Fiske says that the changes noticed in the brain of these men after viewing images of scantily clothed women, may influence the way men perceive women, by turning them from independent people to mere objects. She further says that, “When there are sexualized images in the workplace, it’s hard for people not to think about their female colleagues in those terms. It spills over from the images to the workplace.”

The study subjects were also made to fill out a questionnaire in order to gauge how sexist they are. It was noticed that a part of the brain which deals with thinking about people’s minds and thoughts, was least likely to activate in those men who were believed to be the most sexist, while viewing the images of scantily clad women.

Fiske at the American Association for the Advancement of Science annual meeting in Chicago said that these findings questioned the effect of pinned up sexualized images of women on workplace walls. They state that such images dehumanize women and maybe even encourage men to perceive them as mere objects.

The researchers also say that a deeper analysis needs to be conducted before they can reach a concrete conclusion.