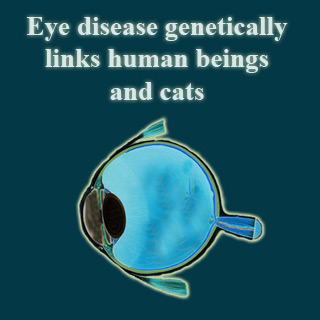 The most common cause of blindness or retinal degeneration could be human autosomal recessive retinis pigmentosa. This disease does not have any therapeutic intervention available. Retinis pigmentosa could lead to night blindness, which may be followed by the loss of peripheral vision, which could eventually even result in the loss of central vision.

For the purpose of the study, the investigators analyzed the genetic mutations of two groups of cats, where one had a congenital form of retinis pigmentosa while the other had a late-onset form. Through this examination, the investigators could detect the genes that played a crucial role in the development of both the forms of the disease in cats.

Kristina Narfstrom, Ruth M. Kraeuchi-Missouri Professor in Veterinary Ophthalmology, University of Missouri College of Veterinary Medicine, says that, “The same genetic mutations that cause retinal blindness in humans also cause retinal blindness in cats. Now, cats with these mutations can be used as important animal models to evaluate the efficiency of gene therapy. In addition, the eye is an ideal organ to use as we examine the potential of gene replacement intervention because it offers an accessible and confined environment.”

In both the forms of the disease in cats, it was found that the genetic mutations were responsible for the change brought about in the structure and function of the photoreceptors. Such changes in the photoreceptors could even lead to blindness. Photoreceptors are the nerve cells in the eye’s retina, which aid in the process of converting light into electrical signals.

Narfstrom says that, “Cats are excellent models because they have relatively large eyes that are comparable to those of human babies. The retinal changes that occur and the progression to blindness in cats is similar to what happens in the human disease. As a surgeon, I can use the same treatment methods and tools in cats that they use in humans.”

It is believed that this discovery could be of great help to scientists in the development of gene-based therapies which may be beneficial to both human beings and cats, alike.

These findings will soon be presented in the Association for Research in Vision and Ophthalmology 2009 Annual Meeting in Fort Lauderdale, Fla.