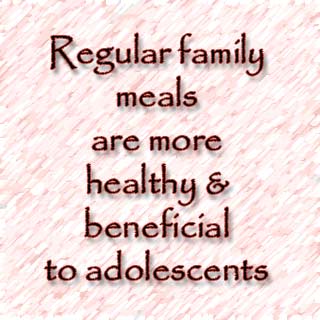 The benefits of having family meals have been advocated for a long time now. Recently has a relationship between eating together as a family and the dietary quality of adolescents been found. A latest study has found that adolescents who have regular family meals have a more healthy diet and meal pattern as compared to those who don’t participate in such meals. This study was conducted by the School of Public Health, University of Minnesota.

The study investigator Teri L. Burgess-Champoux, PhD, RD, LD, states that, “These findings suggest that having regular family meals during the transition from early to middle adolescence positively impacts the development of healthful eating behaviors for youth. Findings from the current analysis, in conjunction with similar findings from a longitudinal analysis of older adolescents transitioning to young adulthood, strongly suggest that regular family meals have long-term nutritional benefits. The importance of incorporating shared mealtime experiences on a consistent basis during this key developmental period should be emphasized to parents, health care providers, and educators.”

It was revealed that about 60 percent of the youth had regular family meals during early adolescence as compared to only 30 percent during middle adolescence. Thus, indicating that the rate of regular family meals reduced over time. Having regular meals with family was associated with a greater frequency of consuming both, breakfast and dinner. It hinted at an increase in the intake of healthy, nutritious foods even about five years later.

This study was published by Elsevier in the Journal of Nutrition Education and Behavior.