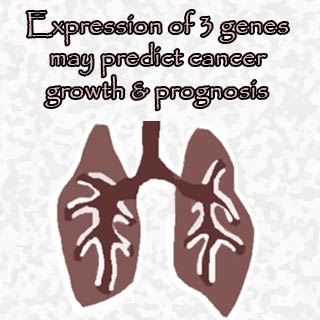 According to a new study, the combined expression of three specific genes in lung cancer tumors may be able to predict the growth of cancer and a poor diagnosis. This study was conducted by the Duke Institute for Genome Sciences & Policy and the Duke Comprehensive Cancer Center.

It is estimated that annually in the United States more than 180,000 people are diagnosed with non-small-cell lung cancer. It is further stated that about 150,000 patients succumb to this disease each year.

For the purpose of the study, the investigators examined around 91 early stage lung cancer tumors. These tumors were examined for a co-expression of the three genes, which they theorized, led to an increase in tumor growth and spread.

Study lead investigator, David Hsu, MD, a medical oncologist at Duke, says that, “Previous work had shown that three genes — TTF-1, NKX2-8 and PAX9 — were amplified in early stage lung cancer tumors. Our study showed that these genes actually work together to provide an environment conductive to the growth and proliferation of cancer cells.”

The investigators linked their findings with the survival data on the patients from whom the tumors had come. In the patients, whose tumors demonstrated a co-expression of the NKX2-8 and TTF-1 genes, it was discovered that they had survival patterns consistent with the patients suffering from an advanced disease.

Hsu says that, “Clinically, most patients with non-small cell lung cancer are treated with a platinum- based therapy, but I think that many people agree that targeted therapeutics represent the future of lung cancer therapy. This study demonstrates that these three lung-specific genes are biologically important in the initiation and proliferation of lung cancer and could have implications for how patients are treated.”

It’s also stated that the same group of patients appeared to be resistant to platinum-based chemotherapy. Thus, suggesting a need for more targeted therapeutics. This therapy is typically given to lung cancer patients as a first-line therapy.

The researchers published their findings in the March 9, 2009 online edition of the Proceedings of the National Academy of Sciences.