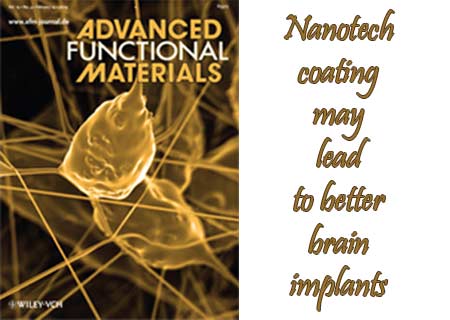 It is stated that, the present brain implants and the next generation of the devices either stimulate neurons with electrical impulses to override the brain’s own signals; or they record whatever the working neurons transmit to the non-working parts of the brain and re-route that signal.

Mohammad Reza Abidian, post-doctoral researcher, Department of Biomedical Engineering, and also one of the developers of the nanotech coating, says that, “You want to be able to use these for at least a couple years. Current technology doesn’t allow this in most cases because of how the tissues of the brain respond to the implants. The goal is to increase their efficiency and their lifespans.”

In the past few years, other researchers had shown that the implanted microelectrodes could permit a paralyzed person to control a computer mouse and move a wheelchair merely through thought. The coating developed by the present team of researchers boasts of bringing about an improvement in this type of microelectrode. This newly developed coating is made of an electrically-conductive nanoscale polymer known as the PEDOT, alginate hydrogel, and biodegradable nanofibers loaded with a controlled-release anti-inflammatory drug. This newly developed coating was used on the microelectrodes which were supplied by the University of Michigan Center for Neural Communication Technology.

The researchers have stated that the presently used brain-penetrating microelectrodes may begin to loose their consistency after a few months. However the newly developed coating helps brain implants operate for a longer while. This could also improve the treatment for paralysis, deafness, blindness, Parkinson’s disease, etc.

These findings are published in the Advanced Functional Materials issue.