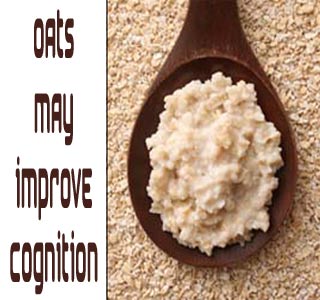 Nowadays, there has been an increasing interest in the manner in which the foodstuffs that people consume may influence their cognition. A series of studies delving into the relationship between an extract from wild oats and enhancement of memory as well as other brain functions may soon be undertaken. This study is said to soon be conducted by the University of South Australia’s (UniSA) Nutritional Physiology Research Centre.

This is said to be the first study of its kind to have attempted to determine if oat extracts have the ability to aid in thinking and memory. They are also attempting to analyze whether the stress coping abilities and a feeling of well-being in old age may be affected with the consumption of oats. In addition to this, the study further hopes to even examine if these effects have come in to existence because of the brain’s increasing blood flow due to oat extract.

“Oats in their various forms and extracts have long been recognized for their physiological and psychological fortifying properties. In addition to their use as a staple wholegrain cereal, oat extracts have traditionally been used to treat nervous exhaustion, depression, anxiety and as a topical application for rheumatic ailments. Research has shown that regular consumption of oats can reduce the risk of heart disease, however further research is required to ascertain other potential health benefits,” says Dr. Janet Bryan from the School of Psychology, University of South Australia.

She further states that, “It is thought that extracts of wild oats contain certain bioactive nutrients which may be able to assist in improving blood flow in the brain, which in turn could lead to improvements in memory and psychological well being.”

Thus, there may be multiple benefits of consuming oats. Study investigators are now said to be on the lookout for suitable volunteers to participate in the study. Men and women between the age of 50 and 90, who have had a slight memory loss are said to be most fitting for the study. These subjects are believed to undergo an examination in order to check their level of memory loss. They may also have to go to the Nutritional Physiology Research Center on three separate events. Once there, these subjects would have to take different doses of either the test supplement or placebo, in the form of a tablet. After which, the volunteers may be asked to carry out a succession of physiological as well as psychological tests.