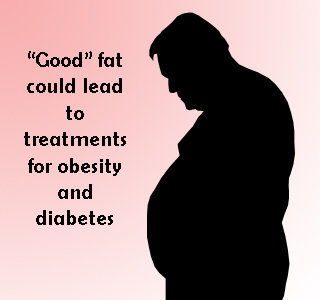 We usually regard the fat present in our body as being “bad”. However, there are a variety of fats in the body which are actually good for an individual. These fats are believed to be essential for keeping a person healthy and away from diseases. According to a new study, a type of “good” fat which was previously thought to only exist in babies and children has now also been found in adults as well. This revelation was made by the Joslin Diabetes Center.

This good fat, called brown fat is said to be active in burning calories and utilizing energy. It was previously believed that this brown fat existed only in children and would mostly disappear by the time one reaches adulthood. However, this new study reveals that brown fat exists in adults and is metabolically active, as well.

Study lead author, Aaron Cypess, M.D., Ph.D., a Research Associate and Staff Physician at Joslin, says that, “Not only did we find active brown fat in adult humans, we found important differences in the amount of brown fat based on a variety of factors such as age, glucose levels and, most importantly, level of obesity.”

The discovery that brown fat is active in adults, indicates that this could mainly be aimed in the treatment of type 2 diabetes and obesity. The main role of brown fat was believed to be burning energy in order to generate heat. It was also found that younger patients had a higher likelihood of having larger amounts of this particular brown fat. Other than this, it was also believed to be mainly found in those adults who were lean and had normal blood glucose levels.

The study experts examined a database of almost 2,000 patients who had undergone positron emission tomography/computed tomography scans for over the past three years for various reasons. Substantial brown fat deposit was detected in about 7.5 percent of the female patients and in over 3 percent of the male patients. They also detected around 33 patients, whose scans revealed the largest concentration of brown fat in their necks. It was also declared that the pathological records of these patients had also shown the presence of brown fat in the same places as the scans. On testing the tissue of two of these patients, the presence of a special heat-generating protein called UCP-1 was detected. This protein was stated to be unique to brown fat.

The study investigators believe that there is a high likelihood that this type of fat may be present in numerous people. However, this fat may be more spread out due to which imaging scans may not be able to detect it. The study findings suggest the possible role played by brown fat in controlling the body weight and glucose metabolism.

These findings also suggest that higher levels of brown fat may protect against age-related obesity. This discovery could help in looking for new treatments for both, obesity and Type 2 diabetes.

These findings were published in The New England Journal of Medicine.