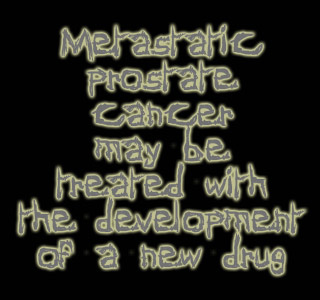 A latest research has uncovered a novel therapy which is believed to hold potential for the treatment of patients suffering from metastatic prostate cancer. This treatment is believed to be useful for those people whose cancer may have become resistant to the presently used drugs. The experts from the University of California, Los Angeles along with experts from various other institutions may be credited for the development of this novel drug.

Now, these experts have advocated that the two newly developed compounds, called the MDV3100 and RD162 may be able to block the androgen receptor (AR) in the cells of this particular type of cancer. It was observed that the MDV3100 could reduce the level of prostate-specific antigen in those men suffering from castration-resistant prostate cancer. Prostate-specific antigen is said to be an indicator for tumor growth in men.

Michael Jung, professor of chemistry and biochemistry, University of California, Los Angeles, says that the MDV3100 molecule was “designed as a very strong antagonist of the androgen receptor to stop the growth of any prostate cancer that requires the AR for propagation, which includes most forms of prostate cancer.”

Around 30 men suffering from this type of prostate cancer were said to have received this drug in low doses. Out of these, a decline in the level of prostate-specific antigen was observed in about 22 of them. Thus, hinting at the possibility that this drug was having an effect on their cancer.

It was supposedly observed that a 240 mg dose of this newly developed drug per day may be capable of reducing the prostate-specific antigen level, along with the number of circulatory tumor cells in these men. Not only this, it was also observed that this drug underwent these effects without producing any major toxicity.

These experts have stated that the MDV3100 and RD162 anti-androgen therapies curb the hormones present in men from further triggering the development of prostate cancer cells. These drugs are even said to be effective in those prostate cells, which have an increased sensitivity to hormones. It is due to this increased sensitivity, that the prostate cells get resistant to the presently used anti-androgen drugs.

The drug has apparently succeeded Phase 1 and Phase 2 clinical trials, and is awaiting the commencement of its Phase 3 trial.

Their findings have been published in the online edition of the Science journal.