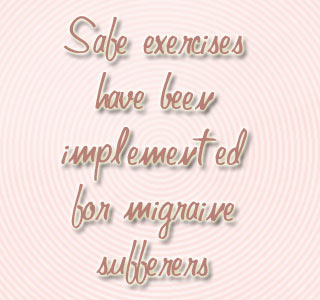 People suffering from migraine usually shun away from aerobic exercises, fearing that physical activity may trigger a serious migraine attack in them. However, now a new exercise program has been developed, which may aid in improving fitness among migraine sufferers without exacerbating their condition. This potentially helpful exercise program has been developed by the experts from the Sahlgrenska Academy.

Migraine is said to be a neurological syndrome which is characterized by altered bodily perceptions, headaches, nausea, and an increased sensitivity to light and noise. Such attacks are stated to vary in their duration and can last for a couple of hours or may even last for a number of days. Although the causal factor for this disorder is not known, it is believed to be hereditary.

Jane Carlsson, Professor in Physiotherapy, the Sahlgrenska Academy, says that, “We know that everyone benefits from a little exercise, but if you’re convinced that a session at the gym will end up with you being confined to bed with a thumping headache and nausea then it’s hardly surprising that people give it a miss.”

Although patients suffering from migraine are usually suggested to exercise, apparently no study has so far demonstrated that exercising could in fact shield an individual from migraine attack. It seems that till date there are no special programs which may be considered harmless for the sufferers of migraine. The special exercise program introduced by the study investigators supposedly seems to have benefited the subjects.

Physiotherapist, Emma Varkey, says that, “We could see that those who participated in the study were much fitter after the training period, since their ability to absorb oxygen increased considerably.”

It was demonstrated that the risk of experiencing increased frequency of attacks in correlation with this type of exercise, may be very low. Supposedly, only one patient seemed to experience a migraine attack which may have been directly linked with the training session.

The investigators further state that they have already commenced another study with the hope of determining whether exercises have the ability to curb or may be even alleviate a migraine attack.

These findings have been published in the scientific journal Headache.