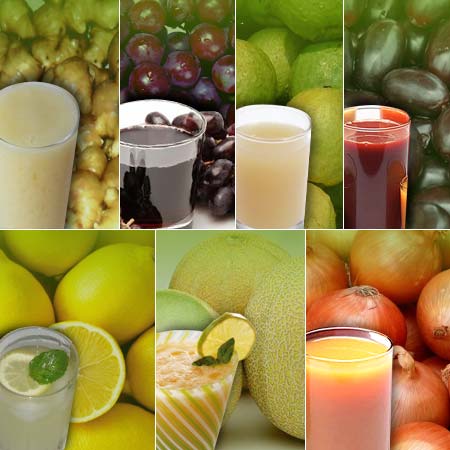 Last week we threw light on the benefits of drinking a glassful of healthy juice through the Part One Juice Therapy article, we continue this week with the part two of the Juice therapy. In this section, we move ahead and check the benefits of these healthy juices. Lets start off with the various contents and juices that could benefit your health and improve it.

Qualities: In Sanskrit, ginger is called ‘Vishvaushadha’. It is anti-rheumatic, stimulates gastric fire and therefore is a good appetizer, laxative and digestive. It is nutritious and is good for the eyes and throat.

Use: Small piece of ginger soaked in lemon water, with a little salt, may be a good appetizer if taken half an hour before a meal. It is believed to be helpful in digesting food and it also expels gas. In fact it is also said to be a boon for old age. People over the age of 50 are recommended to take ginger regularly in the above mentioned way, in order to keep away from diseases related to old age.

Benefits: Ginger dislodges kapha, and expels the gases. It seems to be helpful in reducing edema and also decreasing the level of uric acid. A spoon of ginger juice taken on a daily basis may reduce the risk of developing tongue and throat cancer.

Ginger juice, when used as nasal drops may provide relief against headache. As far as toothaches are concerned, rubbing a piece of ginger on the ailing tooth is believed to be very helpful in relieving pain. Not only this, ginger also gives relief in problems like catarrh and sinusitis.

Qualities: Grapes are sweet in taste, stimulative to the neuro system, soothing, and act as an appetizer. On the contrary, ripe grapes are said to be mild, diuretic and moderate aphrodisiacs. They are said to be cooling and refreshing. They are believed to be of help in eliminating thirst, burning sensation, fever, asthma, leprosy, tuberculosis, irregular menstruation, voice trouble, vomiting, obesity, edema, chronic jaundice (hepatitis) and other disorders. They are also said to decrease gastric acidity.

Grapes are said to be capable of retaining youth and delaying the symptoms of old age. Grapes are nutritive and act as a preventive for wasting diseases. As they are stated to be cooling and have an alkalinizing effect, its fresh juice is said to be capable of soothing burning sensation in the epigastric region. Abdominal gases are also said to be eliminated with grapes, due to its ability to digest food.

Grapes give relief in burning micturition, decrease the level of uric acid, and thereby give relief to people suffering from gout. It is also helpful in regulating the menses.

Grape juice is balvardhak, i.e. it grows strength by increasing the level of blood sugar and also increases the hemoglobin count. Because of its high sugar value, grapes are said to be very helpful while recovering from an acute illness.

Qualities: Guavas are palatable, astringent and sweet. They are said to promote semen, and are also believed to be beneficial in constipation. Guava is cool and keeps a check on the excess flow of bile in the body. It is also stated that they work as an appetizer. It gives relief in burning sensation, and also cures delusion and hysteria. They also have the ability to quench thirst. Other benefits of guava are that they are anti-helmenthic; they provide relief in insanity and also eliminate constipation.

Use: Guava may be consumed directly by masticating it well; however, in order to obtain more nutrients, the juice of guava is recommended. Every 100 ml. of guava juice is believed to contain about 70 to 170 milligrams of vitamin C.

Benefits: As stated above, guava is believed to be beneficial in constipation, purifying the impurities of blood, leprosy and various other diseases.

Qualities: According to the Ayurveda, jambul is a stimulant to gastric fire, diuretic and constipating. It is also believed to keep a check on bile and soothe burning sensation.

Use: A word of caution has been dropped that milk should not to be taken, one hour before or after the consumption of any sort of sour and salty food including jambul. Jambul or jambul-juice is also said to be forbidden for people suffering from edema and vomiting.

Jambul juice is said to be an excellent medicine in the treatment of gonorrhea and diabetes. Its other benefits include purifying the blood by removing its impurities, helpful in leprosy and kidney stones. They are also believed to be helpful in curing dysentery, diarrhea and indigestion.

Qualities: Lemon has been stated to act as a good appetizer, expectorant, and flatulent. Its high acid content makes it a good anti-bacterial. However, the consumption of lemon in its concentrated form may destroy the tooth enamel.

Use: Consumption of lemon is recommended after diluting it with four parts of water.

Benefits: Lemon juice is believed to act as a shield against catching cold, malaria or flu. Lemons are said to act as an anti-bacterial and thus people are recommended to take advantage of these antibacterial and resistant properties of lemon juice particularly during the rainy season.

Lemon juice, when applied on the face is believed to aid in decreasing the marks on the face. However, it has also been stated that this juice should be diluted with water, and then gently massaged over the face. This application is recommended to be left on the face for a period of 20 minutes before taking a shower. Following this pattern for a period of 10 days; boasts of getting rid of 90 percent marks, pimples, and acne on the face. Its other benefits include its ability to decrease heartbeats, which may prove to be helpful for cardiac patients having palpitations.

Lemon is said to be a rich source of vitamin C. It is also said to contain Vitamin P, which gives strength to the blood vessels and thus may be helpful in preventing internal hemorrhage. Because of its ability to protect the blood vessels, it is believed to be good for patients having a higher risk of blood vessel rupture.

Other than the above mentioned qualities, the second most valuable content of lemon is said to be citric acid. They are also believed to have higher potassium content as compared to apple or grapes. Lemon is also said to be useful in destroying intestinal worms.

Qualities: Melon juice is cooling and a good diuretic.

Benefits: As melon has both cooling and alkaline properties, it is said to be able to soothe gastric burning. Its high mineral content gives a feeling of freshness in people. Other than this, its high water content is believed to have certain properties which aid in relieving constipation.

In fact, the pulp of this fruit is believed to be a powerful diuretic which even allays kidney diseases. Since melon juice is believed to promote cough, people suffering from cold, asthma or catarrh are recommended to use it discreetly, or slightly warm it before use.

Qualities: They are cardio-protective, aphrodisiac, digestive and believed to promote good sleep.

Benefits: Onion juice is stated to be of great help in reducing cholesterol and triglycerides, thereby preventing high blood pressure and also reducing atherosclerosis. Onions are even said to have the ability to enhance semen and sperm production, which in turn makes onions good for virility. Its other benefits include its ability to dislodge mucus, which again in turn makes it beneficial in cough and cold. They are also stated to be useful in indigestion and biliousness. More so, onion juice mixed with sugar is believed to be an instant cure for bleeding piles.

Qualities: They are high in citric acid and therefore are a good antiseptic. Oranges are also said to be useful as a blood purifier. In fact, they are also believed to be a regimen in illnesses like fever.

Benefits: The high vitamin C content of oranges, gives them the property of a mild laxative, which makes it good for people suffering from constipation. Oranges are also said to be useful for people with asthma and other bronchial troubles.

It has been stated that a cup of orange juice provides as many calories as three-quarters of a cup of milk.

In conditions like chronic dyspepsia, it has been stated that food may not be properly digested, which in turn causes putrefaction in the digestive tract which further gives rise to gas. Here, orange juice steps in and helps in eliminating this putrefaction of food in the stomach. It is believed to have the ability to cleanse the tracts of the stomach and intestines, which increases the digestive power of both these digestive organs.

Qualities: The ripe papaya is sweet, diuretic, vayu nashak, and virya wardhak. This fruit is said to have high zinc content, and is beneficial to the heart and liver. More so, papaya is said to have certain properties which may be of help in cases like insanity. It is also said to be a good medicine for constipation and urinary disorders.

The white (milky) secretion of raw papaya is believed to contain the papain digestive enzyme in significant amount. In addition to papain, papaya is also said to contain certain enzymes like arginine (for male fertility), carpain (good for heart) and fibrin (necessary for blood-coagulation).

Benefits: Raw papaya juice is believed to be very helpful in expelling round worms from the digestive tract. Because of its high zinc content it is stated to be of great help in shrinking an enlarged prostate and is therefore believed to be good for benign prostate hypertrophy. Papaya is also believed to be useful for any infection pertaining to the mucous membrane. They are also said to have the ability to bring a spleen back to its normal size in the case of an enlarged spleen. Other than splenomegaly, papaya is also said to have proved its usefulness in conditions like anemia.

Papaya is also believed to be of great help in kidney disorders. In fact, ripe papaya is believed to be a sure remedy to treat constipation. The ability of papaya to give relief in cough and cold may be credited to its function of protecting the mucous membrane.

Having said this, it is also been stated that papaya causes heat in the body and thus should be avoided during pregnancy or fever. This claim has been made by Ayurveda.

Use: Since pineapples have a very high content of citric acid, their consumption should be avoided on an empty stomach. Having them on an empty stomach is believed to lead to more acid secretion and hyper-acidity. It has further been stated that pineapples, being a good antiseptic, its juice may prove to be good for the throat.

Benefits: The antibacterial properties present in pineapple, make them very useful in throat infections like laryngitis and pharyngitis. This anti-viral property of pineapple juice is even said to have been confirmed by the Ayurveda experts. As per their opinion, pineapple juice holds the ability to allay bile, destroy intestinal worms and prove to be beneficial to the heart.

If you thought this is the end of the Juice Therapy article, then think again! As we intend on returning next week with the concluding article that spotlights the benefits of the various juices.