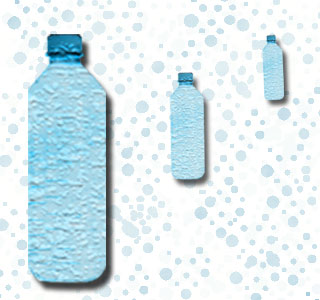 With the hot summer season shining on our head, people usually drink lots of fluids to keep themselves cool. Water intake could easily be considered as the simplest way of keeping oneself well hydrated during this hot weather. However drinking water from a particular type of bottle is said to possibly prove to be hazardous.

According to a study by the Goethe University, Frankfurt drinking water from bottle made out of PET or polyethylene terephthalate plastic may prove to be dangerous to the health. They have stated that this type of plastic may contain estrogen-like compounds which may leach into the water and possibly create hazards to the health.

Earlier studies on the topic were said to stated that BPA or bisphenol-a plastic may be harmful to human beings and animals. It was said that this type of plastic may have an adverse effect on the cognitive process of these beings. Therefore bottle made out of PET plastic was considered to be a safer and harmless alternative to the BPA plastic bottle. However the present study findings may not agree with this claim. They were said to have discovered that certain compounds akin to the female sex hormone may leak into the water from the bottles made of polyethylene terephthalate plastic or PET.

Lead investigator, Martin Wagner, says that, “What we found was really surprising to us. If you drink water from plastic bottles, you have a high probability of drinking estrogenic compounds.”

In order to verify this claim the study investigators analyzed such bottled water through the use of genetically engineering yeast. It was believed that nine samples were taken from glass bottles, nine from PET plastic bottles and two from cardboard boxes.

The results were very surprising. Estrogen like compounds were detected in seven PET plastic bottles and both the cardboard boxes as against to just three of the glass bottles. The study investigators were astounded to discover such a high level of the female hormone-like compound in these water samples.

In order to further evaluate this criterion, the investigators conducted more tests on these waters. In order to verify whether the estrogen compounds were coming from the water itself, they replaced the water with a pure snail medium. Following which a particular type of snail, which is especially sensitive to estrogen compounds, was introduced in the water.

Having said this they have concluded by stating that it may be too soon to accurately verify whether PET plastic bottles may be dangerous to human beings.