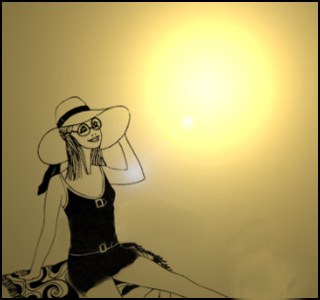 Seasonal month of summer may usually bring with itself a change in the choice of wardrobes. People especially teenagers may chose to wear flip-flops and baseball caps over broad-rimmed hats and fully covered shoes, in order to keep themselves cool in the scorching heat of summer. However this could prove to be a potentially dangerous health risk.

These wardrobe choices could prove to be harmful and may have various health risks associated with it. Repeated exposure of certain body parts to the sun could possibly even lead to skin cancer. This health risk was highlighted by the experts from the Loyola University Health System.

Skin cancer is stated to be the most commonly affecting cancer. Seemingly, most of these cancers may be classified as non-melanoma, which take place in the squamous cells or the basal cells.

“Most skin cancers occur on the parts of the body that are repeatedly exposed to the sun. The problem with flip-flops and baseball caps is that they leave the tips of the ears and the tops of the feet dangerously exposed to sun damage. The potential for skin cancers in those areas are real, especially on the tips of the ears,” says Dr. Anthony Peterson, assistant professor of medicine, dermatology, Loyola University Stritch School of Medicine, Maywood, Ill.

He even goes on to say that, “But now those areas of their bodies have very little protection,” Peterson said. “Combine that with the fact that most people using sunscreen frequently overlook those parts of their bodies when applying it. From my point of view as a dermatologist, that’s not a very good combination.”

The good news is that melanoma may be treatable if they are detected in their initial stages itself. However it is always good to prevent the occurrence of a disease than having to treat it later on. These experts have illustrated a few essential pointers that may aid an individual in preventing the occurrence of all types of skin cancers resulting due to the excessive exposure to the ultraviolet (UV) rays.

1.) Usage of sunscreens may be very crucial throughout summer as well as early fall. Sunscreens with an SPF of atleast 15 may to a certain extend shield one from the harmful UV rays. Evidently, use of a sunscreen with a higher SPF may be better in higher elevations.

2.) Avoiding excessive sun exposure when its dangerous UV rays may be at its peak. Seemingly, limiting sun exposure during the midday hours from 10 a.m. to 3 p.m. may not be a very bad idea. They have also stated that limited exposure to sunbathing and tanning salons may further aid in avoiding the occurrence of this type of cancer.

3.) Covering oneself with protective clothing while outdoor may also prove to be a wise move. Usage of wide-brimmed hats, full-sleeved shirts and pants could also be beneficial.