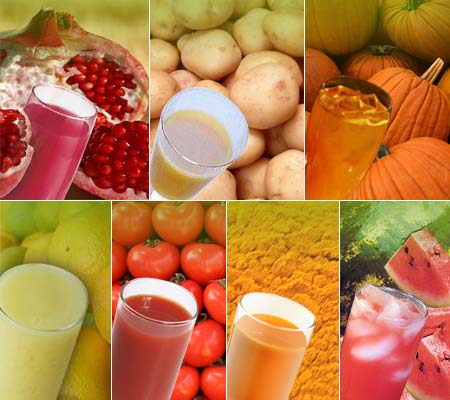 A few weeks back we had presented the beneficial effects of drinking fresh and healthy fruit juices. After the Part One and Part Two of the Juice Therapy article we have reached the consecutive Part Three of it. Following the trend of these articles, here we have highlighted the positive effects of some more juices, which people could probably incorporate in their diet.

Qualities: Pomegranate usually has three varieties – sweet; sour and sweet; and sourly sweet with an astringent taste. According to Ayurveda, pomegranates are ‘tridoshnashaka’ i.e. they effectively alleviate all the three ailments (windiness, biliousness and cough). They may also be beneficial against thirst, burning sensation, fever, cardiac trouble, mouth-disease and vocal disorders. Furthermore, they may aid in curing dysentery and increase blood and vitality.

Benefits: It is believed to be a tonic for the heart and allays cardiac pain. Along with its potential ability to cure vocal and mouth diseases, they also cure acidity. Since they have high iron content, they may be helpful in increasing the hemoglobin count. Pomegranates aid in increasing the appetite and provide relief against anemia. They are also considered beneficial in illnesses like diarrhea, dysentery and cough.

Qualities: Potato is believed to consist of vitamins like ‘B1’, vitamin ‘B2’, niacin and even vitamin ‘C’.

Benefits: Potato skin is high in potassium; therefore after boiling, this vegetable could be consumed with its skin. This vegetable is also believed to be good for cardiovascular health. On the other hand, potato juice may also relieve patients suffering from duodenal and gastric ulcers. Apart from this, they may also give relief to people suffering from constipation and piles. As potatoes contain soda and potash, they may prevent acidosis, and also maintain the alkali reserve of the body. Since the mineral elements of potatoes are believed to aid in the elimination of uric acid from the body, they may be helpful to patients suffering from gout. Seemingly potato and potato-juice may give encouraging results in several skin-diseases, especially in eczema. Therefore for this purpose, potato-juice may be consumed as well as applied to the diseased part of the skin.

Use: Ripe or matured pumpkins may be a much better alternative as compared to the raw ones. Apparently, while extracting its juice, their seeds may also be included with the pulp.

Benefits: Pumpkin is believed to have a high zinc content; therefore it may be helpful for patients suffering from an enlarged prostate. More so, it has been stated that pumpkin juice may possess a neutralizing effect on poison. Apart from being a powerful anti-helmintic (remover of worms from the digestive tract), they are also believed to be helpful in acidity. Pumpkin juice is even stated to be a diuretic. They may also provide relief to patients suffering from swelling, kidney-stones and diabetes.

Qualities: They are cooling, refreshing and quench the thirst. As they are alkaline in nature they are considered to be helpful in acidity. More so they may also help in increasing semen production. Being vayunashak in nature, they are believed to lower body wind. The juice of this blood purifying fruit is believed to increase vitality and resistance power against diseases.

Qualities: According to Ayurveda tomatoes are a good laxative and appetizer. They contain citric, phosphoric and malic acids which purify the blood.

The Vitamin ‘C’ content in tomatoes may not be quickly destroyed because they are supposedly protected by the acid that they contain. Further it has also been stated that the vitamin ‘C’ content of tomatoes may increase on ripening. Only ripe tomatoes are believed to contain vitamin B2. In fact it has also been said that the intake of tomato-juice may be better than orange-juice for children.

Benefits: Since tomatoes have low carbohydrates, they are seemingly advisable for diabetic and obese patients. Apart from being useful in kidney disorders, they may also remove indigestion, gas and constipation. As the iron content of tomatoes are believed to be easily digestible, they get fully absorbed in the body and are therefore presumed to be good for patients with a low hemoglobin count. In fact it has also been said that tomato soup may be consumed when suffering from fever.

Qualities: It is alleged to be a good expectorant and anti-bacterial. They heal wounds, stimulate the liver, promote luster of the body and also improve skin color. Apart from this, turmeric is also believed to be helpful against cough, cold, blood-impurities, gas, wounds, diabetes, skin-diseases, dyspepsia, leucoderma, swelling, anemia, etc.

Use: Two or three teaspoonfuls of turmeric-juice may be consumed directly or mixed with water.

Benefits: Turmeric is alleged to possess a unique property to stimulate and strengthen the liver. This particular property is believed to be exclusive to turmeric, which no other substance contains. The ancient books of Ayurveda have seemingly accepted this fact. More so even modern dietarians are also believed to have accepted this distinct property of turmeric.

Apart from this, turmeric may also be helpful in warding off old age and diseases. Turmeric juice may even be beneficial against diseases like chronic jaundice. There is no doubt about the fact that the medicine which keeps the liver healthy and functional can also keep the entire body healthy and functional.

Turmeric is widely thought to be used as a blood purifier. Turmeric juice drops have been found to deliver favorable effects in eye-diseases such as glaucoma, corneal ulcer and conjunctivitis. Regular intake of fresh turmeric juice in the morning and evening may benefit patients with leucoderma and swelling of arms and legs. When mixed with warm milk, turmeric powder or fresh turmeric juice may have a miraculous effect on cough and cold. A warm ointment made out of turmeric powder may be beneficial when applied over sprained and swollen body parts.

Other than this, turmeric juice may also keep a check on the mucous in the nasal passage, throat or wind-pipe. They are believed to be successful in drying up the mucous membranes and therefore reduce phlegm.

Turmeric may also be very beneficial in skin diseases. They could act as purifier of blood and breast milk. Skin diseases are believed to be cured when an application of turmeric and butter may be massaged on the skin. Apart from this, turmeric is also considered to result in a smooth and fair complexioned skin.

Qualities: Since they have a high water content, they are believed to be cooling and diuretic.

Benefits: The juice of watermelon is believed to give relief in abdominal troubles and may also have a soothing effect on the burning sensation in stomach. As it is a diuretic, it could be beneficial in kidney and bladder disorders (renal dysfunction). It is chiefly used for cooling the body and the mind. They are believed to stimulate the process of rejuvenation going on within the body.

Gourd is of two varieties: Sweet and bitter.

Qualities: They are cooling and cardio-protective. They are alkaline in nature and therefore produce a cooling effect in the body. They are believed to be refreshing and good for the heart. However it should be noted that only the tender, younger white gourds should be selected for food purposes.

Benefits: A tuberculosis patient may experience relief in coughing and also put on a little weight if given white gourd juice. White gourd is also believed to provide good nourishment to an expecting mother. The juice of white gourd mixed with honey may act as a medicine for burning sensation in the body and the throat. They may also be beneficial in case of blood-impurities, abscess, allergies, nose-bleeding and other ailments. White gourd is alleged to aid in decreasing the level of blood uric acid and therefore may be good for gouty arthritis.

All green leafy vegetables have high chlorophyll. Apart from being a good anti-bacterial and laxative, chlorophyll is also stated to contain high quality protein.

Its high chlorophyll and iron content is alleged to cure anemia. Green leafy vegetables are rich in minerals which reduce stomach acidity. The constitution of human blood is believed to be alkaline; therefore the food which contains minerals may be most suitable for human consumption.

However having said this, it is also stated that those who suffer from peptic or duodenal ulcers may not be advisable to directly consume green leafy vegetables because the fiber content in these vegetables may harm them. However it is also stated that the juice of these vegetables taken without its fibers may not be harmful. But people suffering from diarrhea or dysentery could possibly avoid the intake of these green leafy vegetables.

Spinach is believed to contain oxalates, and therefore should be avoided by those who suffer from kidney stones. These patients may also be advised to minimize the consumption of other green leafy vegetables as well.

Qualities: Coriander is fragrant, appetizing, digestive, cool, good for vision, anti-bilious and agreeable to the heart.

Benefits: As coriander contains vitamin ‘A’, it is believed to be beneficial to the eyes. A few drops of coriander juice instilled into the eyes may benefit them. Apart from this, coriander juice may also be quite effective against anemia.

Qualities: Amaranth is delicious, cooling, appetizing, kindler of gastric fire, diuretic, light, dry, digestible and laxative. It not only dislodges phlegm, but may also be effective against leprosy and allergies. They may also provide relief in cough. When digested they may become alkaline in nature.

Amaranth is believed to have a high iron content and may therefore be useful in anemia. Its vitamin ‘C’ content may prove to be effective in the treatment of leprosy.

Use: It is alleged that the consumption of its raw juice may provide its maximum benefits to an individual.

Qualities: It is Vishnu priya. They are believed to be useful in cough, swelling, gas-trouble, vomiting, intestinal worms, kidney disorders and skin diseases. They are even alleged to be beneficial for the eyes and cardiovascular health. Apart from expelling intestinal worms, they are also believed to release a particular kind of gas which purifies its surrounding polluted atmosphere.

Benefits: 20 ml of basil juice mixed with honey may have the ability of enhancing memory and body luster, and are also helpful in decreasing weight. They are also believed to be a good nerve tonic.

A spoonful of basil and ginger juice in honey may work as a good medicine for fever, cough and asthma. Apart from being helpful in diseases like malaria, cold, catarrh and headache, basil is also believed to lower the level of cholesterol in the blood. They may also be helpful in curing allergies.

Qualities: Spinach is slightly pungent, sweet, digestible, cool and dry. It may stimulate peristalsis and is a mild laxative. They are easy to digest and assimilate, and have a satisfying quality. This heavy and palatable green vegetable is believed to be high in vitamin A and may therefore be a good antioxidant. Spinach is also alleged to have a high fiber content and may thus be useful in constipation and also decrease the level of cholesterol and triglycerides.

Benefits: Because of the easily digestible iron content in spinach, they may yield positive results if employed as food-medicine in patients with anemia. The minerals which spinach contain may reduce acidity and bestow health. Spinach juice is believed to be a diuretic.

Note: Since spinach seemingly contains salts of oxalic acid in good proportion; it may lead to kidney stone trouble in people. Therefore, people have been advised to make restricted use of spinach.

Qualities: Mint is believed to be heavy, palatable, warm, appetizing, constipating, lubricious, vermifuge and good for the heart. Apart from expelling gas, they are believed to be helpful in cough, dyspepsia, dysentery, gastroenteritis and diarrhea.