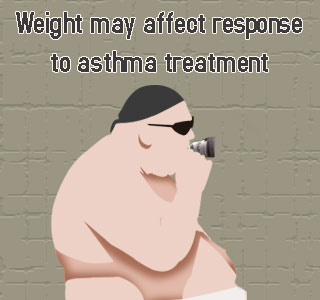 Although obesity may not make asthma worse, it may influence the response to medications. This revelation was made by the investigators at the National Jewish Health Institute.

Earlier studies have put forward that overweight or obese people may have higher chances of developing asthma. The study also suggested that such patients may experience more severe symptoms with a reduction in response to medications as well. These studies were seemingly based on the reports of diagnosis and symptoms of the patients.

E. Rand Sutherland, Associate Professor of Medicine at National Jewish Health has stated, “With both asthma and obesity on the rise in recent years, there has been much interest in the possible link between these two conditions.”

In addition to that, he also mentioned, “By studying a well characterized group of patients with asthma, we were able to determine that increased weight is not associated with more severe asthma. Although benefits can be obtained with weight loss in other diseases, these findings suggest that an improvement in asthma may not necessarily result from weight loss. The findings also suggest that patients and physicians should be aware that obese asthma patients may not respond well to corticosteroids, the most successful controller medication for asthma, which can affect dosing decisions and choices of possible alternatives to steroids.”

Dr. Sutherland along with his colleagues took up the issue and examined a group of 1,256 patients. These patients were believed to have participated in NIH-sponsored studies and were segregated into 2 groups. The first group seemingly consisted of lean patients with a body mass index of less than 25 while the second group was of overweight and obese patients with a body mass greater than or equal to 25. The post examination outcome seemingly demonstrated that lean patients may have slightly greater forced expiratory volume in one second or FEV1 of 3.05 liters vs. 2.91 liters. They were found to have common measures of lung function with slightly greater ratio of FEV1 to forced vital capacity of 83.5% in comparison to 82.4%.

It was also seen that overweight patients appeared to make greater use of rescue inhalers, i.e., 1.2 puffs per day as compared to 1.1 puffs per day. Apparently these patients showed a higher score in the questionnaires conducted on asthma-related quality of life. The score was stated to be 5.77 against 5.59.

Dr. Sutherland further added, “These differences were small and are unlikely to be of any real clinical significance.”

These investigators have stated that lean people may respond better to the asthma controller drugs as compared to their heavier counterparts. The study information was believed to have been based on the findings of previous studies focusing on other asthma-related questions. Therefore new studies are been conducted which may be more helpful in answering questions on the association between increased weight and their response to asthma treatments.

This study has been published in the June 2009 issue of the Journal of Allergy and Clinical Immunology.