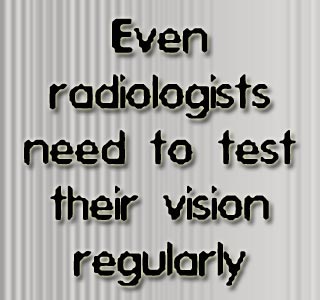 According to a latest study 50 percent of the questioned radiologists either didn’t seem to remember when they had last undergone a vision testing, or they had exceeded 2 years or more since their last vision testing. This study was conducted by the University of Maryland School of Medicine in Baltimore, MD.

Lead author Nabile Safdar, MD says that around 8 of the surveyed radiologists didn’t seem to recollect ever having their eye sight tested. Apart from this, 14 of these participants were believed to have their vision tested about 2 or more years back. Not only this, infact one radiologist was stated to have reported having tested his vision some 15 years back.

Safdar says that, “Although the variation we found in visual acuity among radiologists is unlikely to have an influence on clinical diagnostic performance, as radiologists, we may have a responsibility to our patients and ourselves—to make sure our vision is as good as possible. In the future, professional guidelines should be considered to ensure optimal visual accuracy.”

It was noted that a few of the radiologists evidently required visual correction. Not all of them were observed to have a 20/20 vision.

These findings have been published in the American Journal of Roentgenology.