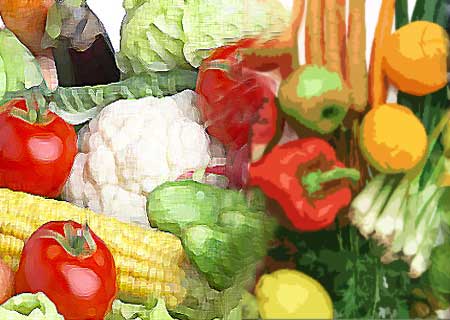 Yesterday being “Eat Your Vegetables Day,” we thought it would be a good idea to highlight a few benefits of vegetables.

Eating vegetables is believed to have many beneficial effects on the health of an individual. Being a natural foodstuff, they are stated to comprise of numerous minerals, vitamins, fibers and various other essential nutrients.

Apart from benefiting the overall health, vegetables are also stated to aid in weight loss. So, all those people trying to lose their excess kilos may want to consider opting for that bowl of salad instead. These veggies may be eaten in their various forms, be it barbecued, boiled, fried or even raw. However the form in which they are consumed may also be responsible for the effect of these veggies on the health. For instance, barbecued or raw vegetables may be a better alternative to their fried counterparts.

These colorful veggies are even stated to be helpful in lowering the risk of eye and digestive problems. Certain vegetables are believed to have the ability to shield one from developing two common age-related eye diseases, including macular degeneration and cataract. Apart from this, consumption of vegetables is even stated to be effective for patients having high blood pressure.

Therefore it would be safe to consider the consumption of generous amounts of vegetables to have the magical ability to ward off various diseases.