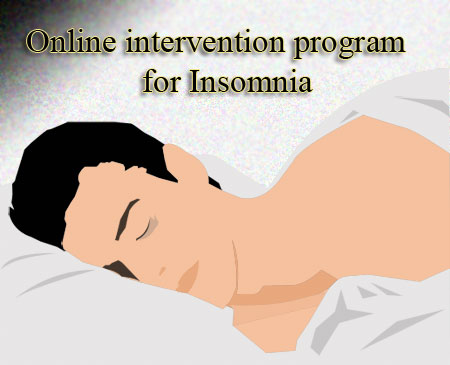 If you are among the people who face difficulty in sleeping, then here’s an article that may interest you. According to a novel study, insomnia patients’ sleep may improve with the help of online insomnia intervention. This program was based on recognized face-to-face cognitive behavioral therapy techniques.

The background information in the article reveals that insomnia allegedly diminishes the quality of life, damages performance in daytime and affects individual as well as public health consequences. In addition, insomnia is known to have decreased $41 billion efficiency annually. It was estimated that nearly one-third of adults state symptoms of insomnia with only 10 percent meeting the diagnostic condition for insomnia.

Lee M. Ritterband, Ph.D., from the University of Virginia Health System, Charlottesville, and his colleagues have stated that, “Unfortunately, availability of cognitive behavioral therapy is severely limited for many reasons, including lack of trained clinicians, poor geographical distribution of knowledgeable professionals, expense and inaccessibility to treatment and clinicians.”

“An Internet intervention has the potential of meeting the large unmet treatment need of the population with insomnia by providing effective treatment through the Web,” experts continued. “An effective and inexpensive Internet intervention would expand treatment options for large numbers of adults with insomnia, especially those whose geographical location prohibits access to relevant care, and could be a substantive first-line treatment choice.”

For the purpose of the study, experts seem to have assessed nearly 44 adults who have experienced sleep difficulties for more than 10 years. The average age of the subjects were observed to be 45 years. Supposedly, about 22 participants were at random selected and given to a control group while the other 22 were provided with the Internet intervention, SHUTi. The program was believed to have run for nine weeks. Also in order to show behavioral, cognitive and educational techniques for improving sleep it utilized text, graphics, animations, vignettes, quizzes and games.

Subjects were advised to stay away from all the activities which may intensify sleep difficulties. For example, refrain from reading and watching TV inside the bedroom, stop taking a nap during the day and change obstructive beliefs and thoughts as well as doubts about the consequences of insomnia. Everyday before and after the program, the individuals rated their symptoms and also maintained their sleep journal. Supposedly, they rated their symptoms on the seven-item Insomnia Severity Index, which generates a score from zero to twenty eight which refer to no symptoms to severe insomnia.

Evidently, patients who were given the Internet intervention program scored well from 15.73 to 6.59 whereas scores for the control group did not change. These increased scores were preserved at a six-month follow-up assessment.