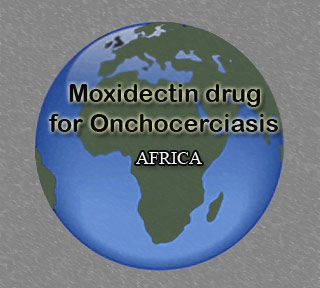 Onchocerciasis or river blindness is claimed to be one of the leading infectious causes of blindness in Africa. Medical analysis of a drug called moxidectin has now been launched across three African countries to possibly eradicate this serious condition. Currently, the drug is being examined for its ability to kill or sterilize the adult worms of Onchocerca volvulus, which cause Onchocerciasis.

The condition is called river blindness because the black fly which appears to spread the infection lays its eggs in fast-flowing rivers. Also a very devastating symptom of this disease is blindness. Onchocerciasis in addition causes an exhaustive skin disease.

“This is a devastating illness that has plagued 30 African countries for centuries, in particular the populations in the most remote areas ‘beyond the end of the road’,” says Dr Uche Amazigo, Director of the African Programme for Onchocerciasis Control (APOC). “Over 100 million people are at risk of infection with Onchocerciasis in Africa and a few small areas in the Americas and Yemen.”

Dr Henrietta Ukwu, Vice President of Wyeth Pharmaceuticals has said that, “Wyeth is committed to improving access to innovative drugs and biologics around the globe including in the developing world. The moxidectin data have been promising so far, and as the programme moves into larger phase III studies, we are hopeful that moxidectin will constitute a significant advance against this devastating disease.”

Onchocerciasis appears to have been controlled by ivermectin which has enabled significant progress. Evidently, ivermectin right now reaches nearly more than 60 million people in Africa yearly. However, ivermectin claims to destroy only the Onchocerca volvulus larvae and not the adult worms. Therefore, yearly treatments for an extensive period of time, approximately 11-14years are recommended in order to be protected from the disease.

Moxidectin on the contrary apparently performs both functions. It could not only kill the larvae but also sterilize/ kill the adult worms. Also, it claims to have the possibility to stop the spread of Onchocerciasis within about six yearly rounds of treatment.

Special Programme for Research and Training in Tropical Diseases (TDR) has teamed up with Wyeth Pharmaceuticals to develop moxidectin for Onchocerciasis. TDR is directed by WHO. They claim to perform a variety of tasks like the development of the drug for human use and primary studies in healthy volunteers, to clinical and community studies in Africa. Also, they seem to assemble the faculty and manage the clinical trials in Africa. Supposedly if this development proves beneficial, they may aid the countries affected with Onchocerciasis.

TDR’s Director Dr Robert Ridley has stated that, “We work with national authorities and country partners to build research capacity and infrastructure. The training we provide to researchers and health care professionals and the experience they gather during the TDR-sponsored studies enables them to conduct other clinical research later on, strengthening the health research systems in those countries.”

Supposedly, TDR will be functioning with an estimation of about 1500 people at four locations in Ghana, Liberia and the Democratic Republic of the Congo. In the initial period of time, they will also be working with African researchers and institutions.

The community services which have been set up in co-operation with APOC, African Control programmes and various other NGOs may aid in distributing the drug, moxidectin.