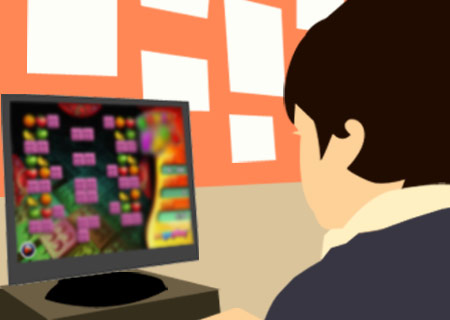 Previously we had covered a very interesting news report stating that the kind of video games played by children may influence their behavior. It was found that children playing games with a prosocial content appeared to be kinder and behaved better with other people after playing the game, and vice versa.

Similarly, it is now been stated that the children playing online games which promote healthy foodstuffs may be more likely to select healthy snacks, than their counterparts playing games which promote unhealthy items. This intriguing discovery was made by Tiffany A. Pempek, Ph.D., and Sandra L. Calvert, Ph.D., of the Georgetown University in Washington, D.C.

In America a stupendous rise in the rates of obesity is believed to have taken place over the past 4 decades.

The experts have explained the cause of obesity by saying, “One potential contributor to the rise in obesity is media exposure, primarily because television advertising markets high-calorie foods and beverages that have little nutritional value. We know far less about how newer media influence children’s food preferences, but Internet use is a very popular activity among youth aged 8 to 18 years. Marketers have taken notice of this online revenue-generating opportunity in which exposure to products costs less than traditional television advertisements and legal restrictions and regulations are virtually non-existent.”

For the purpose of the study, the experts evaluated and assessed around 30 African-American children belonging to low-income families. These 9-10 year old children were divided into three groups, where they were allotted different games to play.

One group was asked to play a game where they would be rewarded if their computer character would choose healthy food items like orange juice, bananas, etc. On the other hand, the second group was asked to play a different version of the same game, where they were rewarded on choosing unhealthier options like cookies, soda, etc. for their computer character.

After having played their respective games, the children in the two groups were later asked to choose a snack from the ones featured in the game. On the other hand, the third group of children was asked to choose their selected food item before allotting them to play the game’s healthy version. Notably, all these children played the games for approximately 10 minutes.

The experts observed that the children, who had played the game’s healthy version before been asked to select a snack, seemed to make a healthier choice than the ones who had played the unhealthier version. Therefore it was noted that public concern over the marketing of unhealthy foodstuffs by online games may be justified. However these findings have also suggested the use of technology to promote healthier and more nutritious foodstuffs.

“Eating patterns established during childhood affect health throughout the lifespan. Thus, it is important that we find ways to promote a healthy lifestyle for our children from an early age, particularly those who come from low-income neighborhoods where the risk of obesity is greatest,” explain investigators.

Although the evaluated children belonged to low-income families, they were noted to be online almost everyday or a number of times per week. Therefore the observations made in the study were believed to have suggested that the internet may be a viable alternative of reaching out to African American children belonging to poorer families.

These findings were published in the issue of the Archives of Pediatrics & Adolescent Medicine.